It is a well-known secret in South East Asia that for years the Thai airlines actively subsidized nations around them to not build their roads.  The reason for this is because the roads were so absolutely terrible that they could run a nice monopoly on flights from Bangkok for all the tourists.  This is finally changing, but the last infamous holdout was the road between Siem Reap and Bangkok, which on the Cambodian side was an all-dirt, potholed affair beyond measure.

Flying to Bangkok from Siem Reap costs $150, the bus is $15.  And they are finally paving said road, so guess which one I did?  That’s right, the one that took nine hours instead of two!  It seemed a bit not in the right spirit to only see Siem Reap in Cambodia after all, and besides which the road was fine after a half hour of dust tops.  In a few more months it won’t be an issue, though I hear they scam you a bit coming from Bangkok to try and get you into a guesthouse that pays commission to the driver.

A roadside market where we stopped to try and get rid of spare Cambodian riel (you switch buses at the border- the Cambodian one is an old not air conditioned affair, the Thai one is a modern air conditioned one).  See the pineapple?  I ate one as breakfast, for the lofty price of $1.  I am so missing South East Asia…

Crossing the border between Cambodia and Thailand is the difference between night and day- the Cambodian side is in scant shade with immigration officials known to ask for weekend “overtime” and whatever else in fees (which is why I went Friday!), and the Thailand side is in a cool air conditioned building that hums with efficiency (or is that the air conditioning?).  I subsequently spent the rest of the day marveling at how modern Thailand seems to me now after Laos and Cambodia, Bangkok in particular.  Whoa, a convenience store and fast food chains?  A somewhat stable currency?  I don’t need to provide my own toilet paper all the time?!  Craziness. 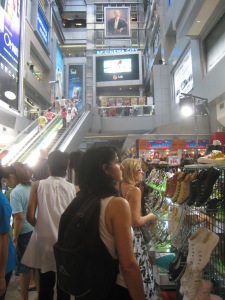 Anyway, once in Bangkok I spent most of the weekend preparing for my flight to Europe on Monday by resting (my foot still hurt a little when I was walking a lot, and I can’t afford to not walk a lot in Europe!) and shopping.  Preparing for Europe from Thailand is a bit like preparing for an Arctic expedition due to the simple reason that it never gets cold here- I haven’t worn long pants in two months, had only one fleece jacket that I’d held onto, and no close-toed shoes at all.  I realize the thing to do around here is normally to head to the weekend market, but it gets really hot nowadays during the day in Bangkok (35C, ie mid-90sF and humid) so I retreated to the giant air-conditioned mall in Bangkok called MBK.  It reminds me more of an indoor market than a mall in the West anyway.

I’m not one for much shopping so I took care of things pretty easily- new pair of fake Birkenstocks for $5, a decent pair of walking shoes for $7, that sort of thing- but the last thing I needed to track down was a sweater as these are somewhat elusive creatures in Bangkok.  I finally found a little stall selling these gorgeous warm ones which confused me due to an “American Eagle- $89.95” tag attached to each one (you get knockoffs galore around here, but usually tagless), until I noticed the “Made in Thailand” tag on the inside.  Difference between buying a sweater in the US and buying one over here where it was excess from the factory?  Just over $70.  And I’m not posting pictures now of all my purchases by the way, on the grounds that everyone will see them often enough in the pictures to come.

Another Bangkok tradition for me by this point- the sushi bar just a road off of Kao Sahn Road, which sells delicious sushi plates for $7 and plays French jazz of all things.  One of those places one hopes to find in a round the world trip, and I will miss immensely.

And last but not least, today was my last day here in Asia so I needed to mail my carefully selected souveniers home (a Thai cookbook, a Lao scarf, and a Cambodian painting of an elephant).  The Thai post office was an interesting affair as due to the painting my stuff didn’t fit into any of their boxes, so the mail clerk made me the box pictured above.  And proceeded to close it so thoroughly that I have absolutely no idea how my parents are going to open it when it arrives on their doorstep in a month.  Total cost of personalized box and shipping overseas via economy air?  About $8- for some reason surface shipping was more expensive.

Anyway, I have to stop this now and make sure my affairs are in order to head to the airport- my flight to Europe leaves in a few hours and it wouldn’t do to forget anything!  The summaries I wanted to write will have to wait for a colder continent… goodbye Asia…

This entry was posted in Cambodia, RTW #1, Thailand. Bookmark the permalink.