The first sign that Milan is not quite like other places in Italy is that only Eurostar, the most posh and expensive type of train, goes there, and even second class is filled with businessmen a hell of a lot better dressed than I am (as opposed to  the rest of Italy, where everyone is just a lot better dressed).   The city itself is also twice as expensive as anywhere else in Italy as the business capital of the nation, which is why I only spent a day there before catching a budget flight. 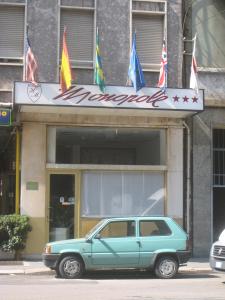 When looking for a hotel to stay at near the train station (there is no such thing as a hostel in ritzy Milan) my eye caught this place and immediately knew I needed to stay here.  If you don’t know why a place called the Hotel Monopole receives such a distinction, then you are obviously not geeky enough.

The number one tourist attraction in Milan is the magnificent cathedral- I’ve seen more cathedrals in the past few weeks than most people do in a lifetime, but I still liked this one!   Just the outside alone was great, here is a close-up of the spires-

The inside was worth a look as well, and frankly felt like a forest of stone columns was growing in there-

You can also  go down below the cathedral to view the tombs of various saints, including what are claimed to be their remaining body parts if you’re into that kind of voyeurism.   After I was done with that, though, it was time for a bit of walking about in the bright sunshine.

A typical view on Via Dante, one of the main shopping streets in Milan.   I could so happily spend the rest of my trip budget while in Italy on all the lovely clothes I see, until I remember I don’t have anyplace to wear them when I get back  home. (Too much distraction in a physics department; I’m not sure how Lisa Randall does it.)

And because it was too nice a day to do much else I ended up getting a nice gelato (dark chocolate, mango, and tiramisu) and wandering through one of Milan’s parks to eat it.  Because if you’re lucky enough to spend a lovely spring afternoon walking in Milan eating a gelato, you’re lucky enough.

After cursory inspection, I’ve decided Milan is the sort of city that would probably be nice to live in if you were to stick around long enough to get under its skin.  Provided you had a nice job that brought in twice as many Euros as working elsewhere in the country, of course, as you’d be declaring bankruptcy pretty quickly if  you didn’t.

This entry was posted in Italy, RTW #1. Bookmark the permalink.

One response to “Milan”