Of course, the highlight of Hungary was hanging out with my cousins- 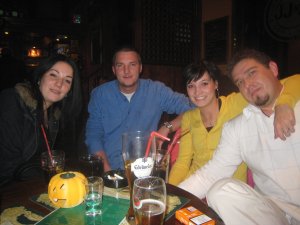 Left to right is Bogi, Gyuri, Judit, and Judit’s boyfriend Balazs.   Bogi has lived in the U.K. the past few years but was home for the holiday, Gyuri is currently a cop in Miskolc, Judit of course was with me in Thailand, and Balazs is a surgeon in a town near Budapest.   We had a lot of fun.

My first full day in Miskolc was a Thursday, meaning we had to go to “The Rocky.”   This is the de-facto name for the university nightclub in Miskolc called the Rockwell Club, as I have yet to hear anyone call it anything but The Rocky.   I last visited three years ago when they had an entertaining “New York! London! Tokyo! Miskolc!” decoration on the wall because clearly Miskolc is in league with those places as a party destination, but unfortunately (fortunately?) they’ve changed it.

And because I have nowhere else to really mention it, I do find it entertaining that if you go dancing in a Hungarian club guys will try to grab girls on the sly around the waist to get you to start dancing with them, as if you somehow wouldn’t notice.   Sort of a heralding back to the days when the marauding Magyars would sweep through Europe picking girls up onto their horses in order to get a wife.

Anyway, because it’s important in Hungarian culture, my cousins also made a point of introducing me to palinka, the national schnapps-like liquor made from various types of fruit-

Here’s a fun statistic for you from The Economist, which two years ago came out with the  list of countries that had the most alcohol consumption by volume.  Number one was Ireland, surprising everyone, number two was Luxembourg, confusing everyone, and number three was Hungary, freaking everyone the hell out.  You know why?  Because the Irish drink beer whereas Hungary is not really a beer-drinking country, preferring wine or spirits.  In fact, if you are not offered a shot of palinka within five minutes of entering a Hungarian household it’s a pretty safe bet that the owner hates you.  Pity the stuff burns- 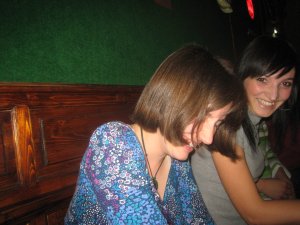 A Kurt Vonnegut quote springs to mind- “If you have a Hungarian for a friend, you don’t need an enemy.”

To counter the madness, the next morning is spent a bit more like this- 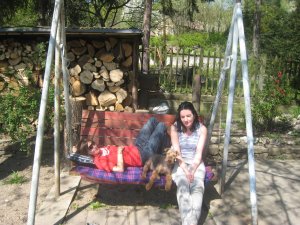 Me and Bogi on the swing in my cousin’s yard.  I have a long history of being lazy on this swing- 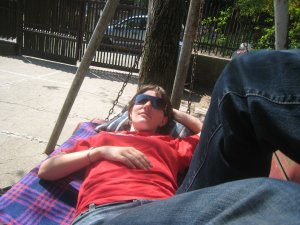 A retaliatory picture of Bogi with one of their two Welsh terriers, Rudi-

Not to be confused with the second terrier, Gypsy- 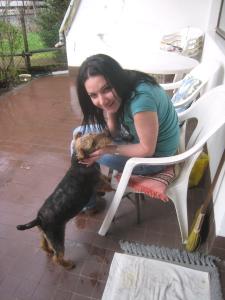 Of course, I have a problem telling the two dogs apart so I’m half-expecting Judit to comment here, telling me they’re both pictures of Gypsy and forcing me to dig up another picture.  Hmmm… Anyway, before I get distracted on this point I will just wrap things up and say my cousins are awesome.  And if you visit Hungary don’t forget to be careful with the palinka.