After ten days in Miskolc I finally bid goodbye to my relatives and was seen off at the train station with lots of kisses and a giant bag of food that I had no chance of soon finishing.  My destination was Pécs, a small city in the southwest of Hungary that is about as  far from Miskolc as you can get while still being in the same country.  This was for a few reasons- it’s one of the few places in Hungary I’ve never been to, I wanted the advantage of traveling somewhere where I could use my second language for once, and everyone says Pécs is an incredibly lovely town.  Turns out they’re right- 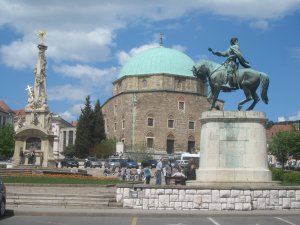 Szechenyi square, the main square in Pécs with an old Gothic church that was turned into a mosque under the Ottomans in the 14th century.  Enjoy the view while it lasts- in two weeks time they’re going to begin renovating the square extensively, meaning you won’t see it looking half as pretty later this year!  The reason is in 2010 Pécs is going to be named as a European Capital of Culture, and renovations have already started elsewhere-

This is part of the cathedral in Pécs, which I’m sure would be just gorgeous if that annoying scaffolding weren’t in the way.  No matter, what’s exciting about this place is below ground in the courtyard in front of it-

This, ladies and gents, is part of the oldest Christian cemetery in the world.  Pécs was an old Roman city, known as Sophianae at the time, and became an important Christian city. (And then, for their piety, God sent the Huns and Magyars to pillage and conquer them.) The tombs date to the 4th century and a lot still have surprisingly intact frescoes inside that are lovely.

Another view of the museum under the courtyard, which is quite nicely done.  This open space was going to be used by some high school performance later that evening; the teenagers were rehearsing a few traditional folk songs that made for good background music.

Another odd thing about visiting the site was how they had a traveling exhibit there of the best press photos taken in 2008.  Which was certainly very interesting to see and all, but it was a bit jarring to keep alternating between “pretty ancient frescoes” and “soldier wounded in Afghanistan.”

Speaking of museums here’s another top-notch one in town, albeit one that broke my brain.  Victor Vasarely was a modern artist born in Pécs and went on to produce brilliant artwork that focused on optical illusions and the like before people could churn out such things on the computer.  The museum is top-notch, though there are so many optical illusions that I got a bit of a headache afterwards.

One of my favorite things about the Vasarely museum though were the museum guards- you know how in any museum in the world they ubiquitously sit or stand while looking bored out of their mind?  Well here there was nothing of the sort, and the guards passed time by encouraging you to view a piece from a specific angle or even producing a few facts about the artwork itself.  I’ve been to museums on five continents and this has never happened, and it struck me as such a quintessentially Hungarian thing to do that it made my day.

The beautiful lilac blooming at the gate to the Vasarely museum.  Smelled divine too.

Here’s a fun little bit of local culture for you.  In the 1980s young couples in Pécs began hanging padlocks on this fence upon which messages like “Monica and Alex Forever” were written as a symbol for their love.  Since the tradition is beginning to spread to other cities- they’re even beginning to hang them on a bridge in Miskolc, though it looks nowhere near as spectacular.

For awhile the government of the city was upset about the fence, complaining about the act of vandalism which is silly because Hungarian government is too inefficient and corrupt to care about a bunch of locks on a fence.  Want an example?  There currently is no mayor in Pécs- the last one died of cancer a few months ago, and the one before that has been in a coma for three years but kept getting his salary for two.  Needless to say, very little has been done to prepare Pécs to be the culture capital next year.

Moving along, here is a sign I saw on the great main street in town, which translates roughly “and on the eighth day, God created the BEER.  Well done God!!!”  I suppose you’ll now need to ignore everything I said about this not being a beer country earlier, but the local beer is pretty tasty. 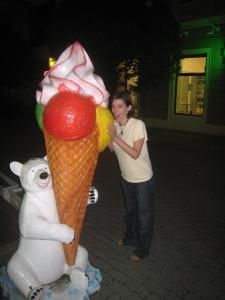 The ice cream was pretty good too… 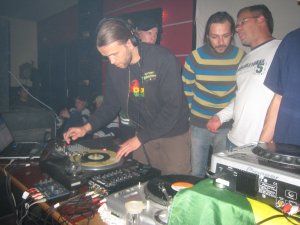 And last but not least, this was a scene from the German reggae party I was invited to.  It was just as weird as it sounds, but Pécs is a pretty big college town so you take it all in stride I suppose.