Without a doubt, one of the best things about visiting Hungary is the food.  Beyond the nostalgia factor and the “it all tastes so good” merit, there are various foods you can only get your hands on while in the country and hence I pig out a lot on.  And while a lot of these don’t exactly fit American tastes, just remember this is being written by a girl who ate bugs in Thailand ok?  And this all is unquestionably a lot tastier than the bugs were…

First and most important, we did a barbecue of sorts at my cousin’s place and this was what I spent my time roasting- a nice piece of szalona. Usually translated into “bacon” and pretty similar in many respects, but not the thinly sliced stuff you get in the US but rather a large square of it.  Yes, you can practically feel your arteries clogging while eating this stuff,  but if that weren’t enough one customarily drips the grease onto the bread while  roasting it.  To quote my mom when she heard about my meal plans, “just be sure to drink a lot of wine so you don’t get a stomachache.”

Food obsession #2, known as langos.  You know that “fried dough” you can get at carnivals in the US?  Same idea, but instead of sugar you slather it in sour cream, cheese, and garlic.  Trust me, it is much better this way! 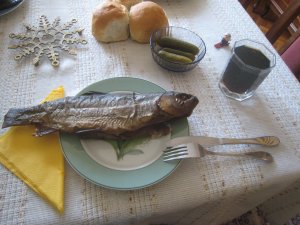 This, ladies and gents, is a smoked trout from a trout farm near Lillafured that is considered to be one of the best in the country.  I usually don’t like fish but love this stuff- you peel back the skin and the flesh falls off the bones… 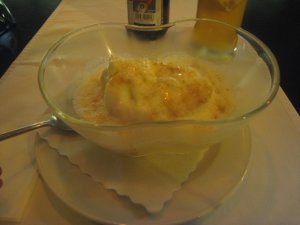 Here’s an interesting note- you know how one ideally comes on a trip like this to figure out things about yourself you didn’t know previously?  Well if this post so far hasn’t illustrated it completely, somewhere along the way I realized I don’t have an extraordinarily strong sweet tooth.  Usually if given the choice between a candy bar and a bag of chips I will go for the chips sort of thing.

While in Pecs one night, though, I decided to vary things and choose a desert off the menu.  None spoke out to me except the one I’d never heard of, madartej, and I almost broke my “not actually Hungarian” cover by exposing my ignorance to the waiter in asking what it was. (I’m told I have a slight accent while speaking the language so people know I’m not “really” Hungarian, but it’s one thing to have an  accent  and another to not know what a standard desert consists of!) Turns out it’s sweetened and caramelized egg white foam floating in sweet cream.  Not bad, really.

And then I ended up taking my careful time finishing every last drop of this desert because I suddenly for the life of me couldn’t remember the Hungarian word for “check.”  Yes, I’m fluent, but sometimes a word or two escapes me!  After a few minutes the light clicked on and I proudly told the waiter “a szamlat, legyen szives!” with him getting even more confused as to why I was in such high spirits to part with my money.  Luckily he didn’t ask though, as Hungarian waiters have got to be the most polite in the world.

Ok, this one made me absolutely giddy for two reasons- first it’s delicious, and second for once I didn’t need to share it!  The above is tatarsteak, aka steak tartar, aka I don’t know why so many people I know have no issues with eating raw fish but balk at raw steak.  Cultural preconceptions I guess?

Usually if you ever spot this dish in a restaurant it’s an appetizer, and because it’s typically a really nice restaurant where you find it in the US I’m with my family.  Now I love my family to death but the problem with appetizers is you rarely get to eat as much as you want (even though for something like steak tartar it’s me and my mom eating most of it), but one great advantage  of traveling on your own is you can indulge in a little selfish behavior when it comes to your food.

Needless to say, after writing all that I am now more than ready for dinner.  Ciao!

One response to “FOOD!”