For those keeping track, I’ve had a fair bit of luck when it comes to weather on this trip.  Sure it got ridiculously hot in Asia and snowed in Italy, but by and large the seasons have cooperated to the point where I lost my umbrella a few weeks back and had no reason to replace it.  This was only going to last so long, obviously, and my luck ran out whilst heading to Hvar, an island two hours by ferry from Split.  It’s supposed to be the sunniest place in Croatia, but what was light drizzle on the mainland turned into buckets falling from the sky by the time I arrived and took the bus to the village of Hvar proper.

At the bus station, the Croatian ladies accosted me.  They do this at every bus station in Croatia, brandishing signs that say “soba rooms zimmer” because a lot of the locals make money on the side by renting places to tourists (there are older men who do this too, but none are stupid enough to proposition a young woman traveling alone).  There was one woman at the station in Hvar who was particularly keen on getting me to go look at her spare apartment, so I asked her how much out of curiousity.

“150 kuna,” she said, about US$27, on the grounds that she wasn’t keen to stand in the rain all day not getting her money.  So I happily spent the next two nights cooking for myself for the first time in months and playing Pandemic 2 while watching CNN International tell me we are all going to die of swine flu.  What a great place!

The view from my apartment on Hvar- 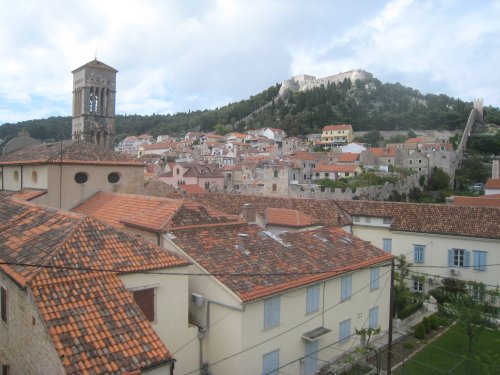 I know, I hate me too.  This picture was obviously taken once the weather had cleared up, so I went out exploring!  Time to set sights on the fortress on the top of the picture- 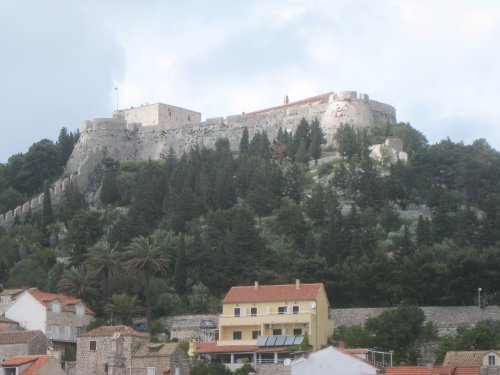 Back in the day the fortress was used to protect the island’s population against the invading Ottomans and the like, but now its primary purpose is to give the tourists a great view of the city-

A better view without a tourist in the way- 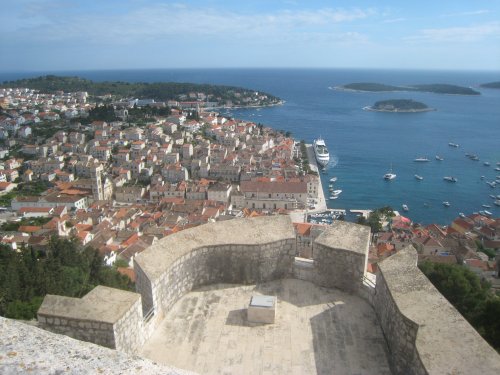 Yeah, at some point I should mention that everyone on Hvar is happy to tell you that it is ranked as one of the top 10 most beautiful islands in the world.  I have no idea where this statistic is from (though I am jealous of whoever got that job) though I must say I arrived in a torrent of rain and still found myself believing it.

What has got to be the prettiest church in the world when location is factored in, in the main village.

Lots of beautiful wildflowers this time of year too!

One of the things I idly keep track of while traveling is what I will purchase when I get home and have money again to buy stuff.  I have never been good about buying things because I’ve spent most of my college years saving for some trip or another (I’m such a terrible American I put my stimulus check in the bank and am spending it abroad!), but once I have dollars to spare the list goes something like this-

And thanks to recalling my affinity on Hvar, we now have

Really now, I remember reading once about how Mike Brown, the planetary scientist at Caltech who discovered the tenth planet, spent his grad student years living on a sailboat and being intensely jealous of this.  Granted his going to school in Berkeley was a bit better as far as climate went but dammit, I want a sailboat!

Back to the location at hand however, I found myself intensely liking Hvar- the island is gorgeous, the village is adorable, and the Croatian lady has really nice apartments (oh, and a website her daughter runs for said nice apartments).  Somewhere along the way it struck me as the perfect sort of honeymoon place should anyone want a suggestion- alas I won’t take it, as the only “what I’d want for my wedding” point is I’d want to go on honeymoon somewhere neither of us has been before, which conveniently ties into my opinions on elopement. (If you ever want some fun at the dinner table by the way tell your parents you plan to elope- entertainingly my dad is the one who was more horrified about the prospect.)  I suppose I’m not making things easy for any potential suitor though.