The old town in Dubrovnik is incredible, but it’s pretty small and only ~7,000 inhabitants live within it. So if you spend time in Dubrovnik you will eventually take a look at some of the other sights as well.

Another reason to stay at Dubrovnik Backpackers Club- they do a really cute little tour of the surrounding region for a cheap price, run by one of the sons of the hostel owners (who will tell you stories about how he played hookey during the siege of Dubrovnik to help the defending soldiers during the war- at age 13). First stop is the hillside above Dubrovnik where there’s an old fort-

See those mountains reaching up behind me? That’s Montenegro, which I never properly visited on this trip but got to leave some of the rest of the world for the future I guess. To the left of me but not visible in this picture are a range of mountains in Bosnia- Dubrovnik occupies a bit of Croatia not connected to the rest of the country because Bosnia gets a few miles of coast so it can have a port thanks to a centuries-old agreement with the Ottomans. You’d never tell coming over except for a brief border stop where they don’t even stamp your passport.

There are two forts in Dubrovnik- one the Croatians held throughout the war and is now being restored to be a museum, and the one where the Serbs were. Which is now a no-kill shelter for stray dogs, on the grounds that the locals would rather have dogs in the fort than Serbs (clearly the tensions between sides in this part of the world won’t be smoothed over for years to come). So when you visit the fort-turned-pound you are greeted by a deafening racket of barking and the realization that these dogs have a gorgeous view most people would die for.

Another interesting sight up the coast from Dubrovnik is the old botanical garden, a lot of which has been allowed to grow wild but is still lovely.  This house is actually an ancient Ionian trader’s home (read: ancient Greek) and is the oldest set of ruins in this region.  Nowadays it’s often frequented by teenagers smoking pot, but we didn’t run into any of them.

Turns out those Ionians sure knew how to find a great view!  Interestingly just to the left of here is a nice old abandoned castle that is for sale- catch is it’s so expensive that John Malkovich wanted to buy it, but couldn’t due to the price.  Thus the ruins stay ruined except for the locals looking for a bit of quiet coastline to stretch out on.

During the day, one of the popular things to do to get away from the crowds is head to  Lopud Island, just outside the old town- 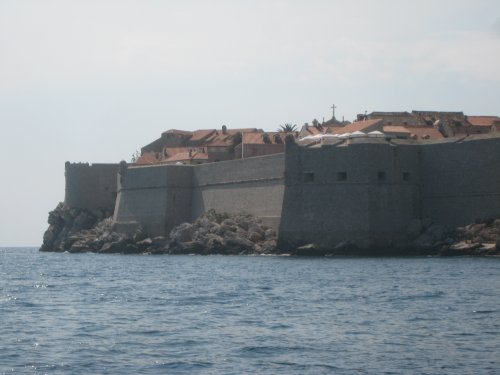 Dubrovnik from the ferry out to Lopud, which was packed to the brim with tourists and Croatian daytrippers.  There was a sign mentioning the maximum capacity was 200 people, a number definitely surpassed as there was barely standing room by the time we left port. 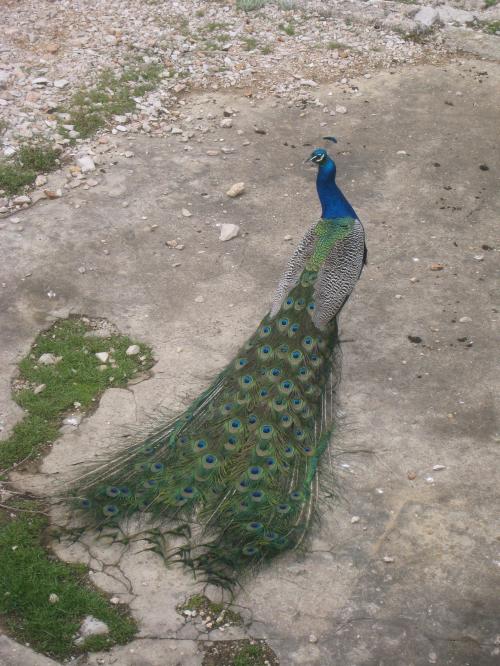 When you get to the island, the first thing you hear is this odd mewing sound that sounds like a bunch of cats.  The culprit?  Peacocks, who have lived on the island awhile now thanks to it being the former summer home of Archduke Ferdinand.

Lots of the peacocks were trying hard to attract the peahens- they slowly walk around in a circle showing how awesome their feathers are, then when the female approaches further they do a little dance and bring the feathers forward in an attempt to trap the female.  Didn’t work in any of the cases I saw but I take it as further proof that humans are not as far off from animals as we like to think.

Oh, and because I was curious about this later I looked it up and it turns out the proper name for the birds is “peafowl” as peacock is actually just the male, and they’re originally from India.  The more you know…

A brackish lake on the island that was quite lovely- lots of bathers in summertime but this time of year it was still chilly.  But it turns out the water isn’t particularly brackish- a simple taste test revealed it seemed just like seawater, so my bet is it just seeps in from the nearby ocean somehow.

And here is a view from Lopud Island towards the mainland while I was waiting for the return ferry- thought it was an interesting superposition of old versus new sailboats, and for any interested parties the dog pound fort is on the top of the mountain on the left.  Really, you’d miss a lot in Dubrovnik if you didn’t look beyond the old town!