Ireland is an interesting place because everyone thinks they know everything about it before even visiting.  It’s got to be the best-marketed country in the world- they even got all these people who aren’t even Irish to celebrate their holiday!- so it’s neat to show up and realize the actual place doesn’t follow your preconceived notions.  Which in hindsight you should have realized would happen but we all get caught off our guard on occasion.

– The pub life.  I list this first because back at home whenever I went to an Irish pub I’d find myself saying “you know, I really want to visit Ireland” and I am proud to report the stories live up to the expectations!  The Irish are remarkably friendly, and great musicians are a dime a dozen (they don’t play Irish trad normally though- it would be the same as us listening to She’ll Be Comin’ Round the Mountain When She Comes or other folk songs in the bar).  I’ve always been a traitor to my generation in that I like to hear myself think when going out or at least having good music instead of base  pounding my head, so Ireland was great for this. 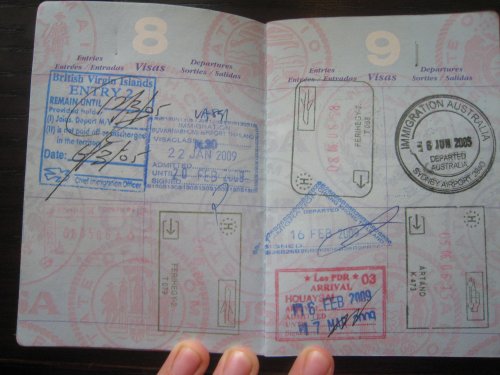 – Dublin was a bit meh, just another big city, but i met cool people there and got new pages for my passport.  I am including the above so you guys can see why I needed one- pretty much the whole old part looks like this by now!

– My favorite place in Ireland, though, has got to be Galway.  Seriously, go to Galway as you won’t regret it.

– Killarney I will write off as a necessary evil to go see the spectacular Ring of Kerry.  There’s nothing really wrong with Killarney, it’s just an incredibly touristy place that pales in comparison to the other fun towns Ireland has to offer.

– Learning Irish fiddling from Theresa and exploring the dime-a-dozen ruins in Loughmore.

– Another thing I liked after so many months on the road is how this was the first place I’d been where they spoke English!  I never realized just what a great asset it is to assume everyone can understand you until I came to Ireland and realized just how great I’d gotten at pantomiming these past few months.

– This is the problem with Ireland- eventually you will come across a point in this nation where it is pouring rain and you just arrived in a strange place.  There’s a hostel, where’s the hostel?  The rain makes things seem longer than they are so maybe that guy you asked directions was just trying to mess with you.  Eventually you will come across the hostel but not before you are completely soaked despite umbrella and rainjacket, which sucks when you’re me and only have one pair of close-toed shoes.

To be fair about the Irish weather it’s not like you haven’t received enough warning about what you’re getting into (that’s one preconception that will remain firm!), and traveling to the U.K. afterwards will seem positively sunny in comparison.  Plus the Irish have long ago realized that all you want to do on a rainy day is disappear with a coffee or pint at a nice pub, and have accomodated accordingly.

– On the other side of the spectrum, I got sunburnt while reading in the park  in Limerick one afternoon.  I’m not sure if this is a good or bad thing, though to explain there was a lovely five day stretch of perfect weather I will not complain about otherwise.

– The fact that my camera finally broke and I needed to shell out lots of Euro to get the replacement.  RIP camera…

– As a final note this is one thing I will never, ever get used to in Ireland- the pubs close early!  Really early, as in 11:30 on weeknights and an hour later  on weekends (clubs are until 2 and 3, respectively, but I’m not a fan of getting kicked out of the comfy pub!).  They have this curfew by law.  The only other country I have been to where there was a national law dictating a curfew was Laos, and I find it odd that Ireland is in the same boat as a communist country on this.

Anyway, that is Ireland.  What a great little place!  I think it gets the distinction of being the second country I’ve visited on this trip that I wouldn’t mind setting down in for a little while, so I hope to be back someday.

This entry was posted in Ireland, RTW #1. Bookmark the permalink.

2 responses to “Summary of Ireland”