I stopped complaining about the pace of the cruise when we got to Crete. Possibly because we spent two nights here for a change and because I have eagerly wanted to come here for years.  Why?  Because of the palace at Knossos- 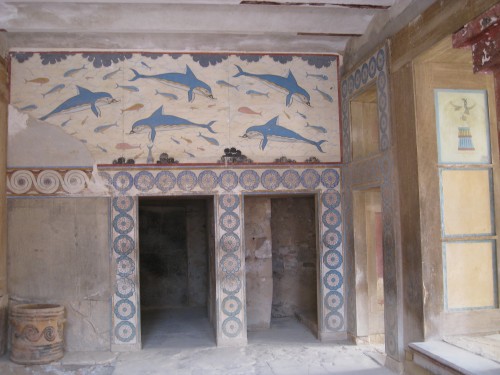 Knossos is the largest set of ruins of the ancient Minoan civilization, which flourished about 4,000 years ago.  I took an ancient civilizations course once during my copious free time as a physics major, and I concluded at the time that if I could choose which ancient civilization to be a part of it would be Minoan, the first ancient civilization of Europe.  There are a few reasons for this- women actually had a bit of power, their art is a beautiful transitional mix of Egyptian and Greek, and they were the first people in the world to figure out indoor plumbing.  Seriously, this is the queen’s sitting room and to the left there is a flush toilet, which had water coming from a mountainside 10km away!  The moral of the story here, of course, is that of all the modern technology you can figure out indoor plumbing gets priority.  Let that be a lesson to you.

And before you ask, no, this picture is not actually what the palace looked like when they discovered it.  This is because it was originally discovered a hundred years ago when archeologists didn’t just leave everything as they found it as a rule, so Sir Arthur Evans reconstructed various parts of the palace to show what it would look like.  I realize this is the biggest faux pas ever nowadays and they would never do it, but I must say it’s quite helpful to visualize a palace when you actually have a few rooms to work from and not just the foundations! 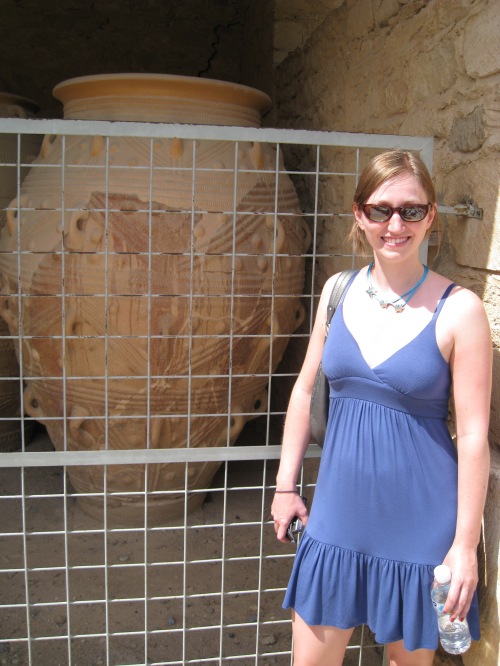 Another detail of the palace Linda and I enjoyed were the giant vases- there’s one behind her for scale.  These things are huge- so huge that they were never moved, and the entire kiln was built around them to be fired.  Which leads to the obvious question of why you would ever do such a thing, but it turns out these giant jars were where the daily wheat rations were stored for the workers in the palace.  Can’t make off with a jar of grain if it’s friggin’ huge, can you?

The most interesting thing about the Minoans though, or at least to me, is you hardly hear about them compared to the Egyptians or the Greeks for a very simple reason- we can’t read their language.  They wrote in a form of writing called Linear A that has never been deciphered, though this doesn’t mean it never will.  After all we had no idea how to read Egyptian hieroglyphics until the Rosetta Stone was discovered, and there is an ancient form of Greek called Linear B that was a mystery until just a few decades ago when a British schoolteacher worked it out.  Until then, all we know about the Minoans language-wise is from ancient Greek myths- for example, this palace is where the minotaur legend came from (not a surprise, with 1,500 rooms to stumble through) so it is said the word “labyrinth” is Minoan.  Huh. 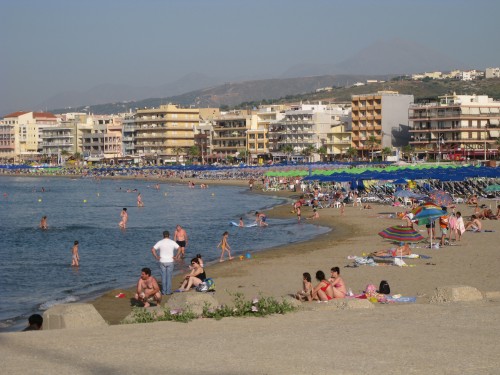 So what else is there to do in Crete once you’re done with the Minoans?  Answer: the beach.  Crete is a popular holiday spot for Brits and Germans to come sun themselves, which means the beach has ladies bathing topless but they’re all women guys would rather wish to see covered up because they’re fat and beet red.  Even after three months here this is one aspect of European culture I can’t say I’ve figured out. 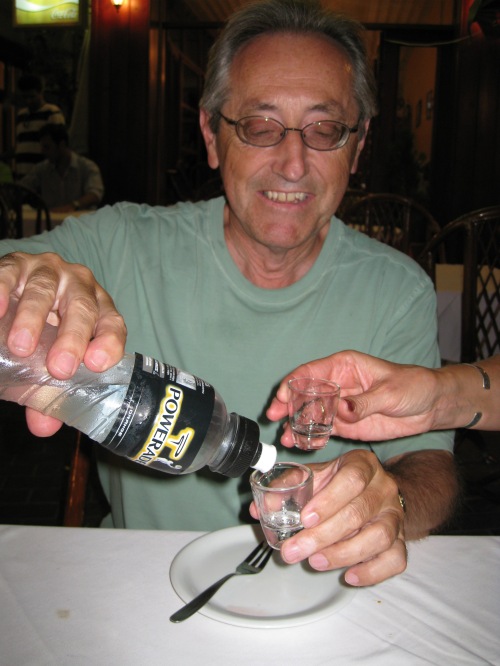 And my family will always remember Crete because, well, this is where we discovered raki.  I think I mentioned this before.  As it turns out there is a Greek custom that a restaurant will either give you a little dessert or shot of liquor at the end of a meal, and the place we went on our first night gave us a tasty shot of clear liquid we all rather liked.  Upon inquiry our waiter told us the stuff was “holy water,” and proceeded to bring us a filled Power Ade bottle with the understanding that we should help ourselves.

So we did.  Turns out my mom knows some interesting Hungarian drinking songs.  And needless to say, we bought a bottle of raki at the airport in Athens so we could enjoy it again later.

This entry was posted in Greece, RTW #1. Bookmark the permalink.