I’m sure most people don’t realize it but there is a method to my traveling madness, or at least the Africa portion of it anyway. Two years ago when I returned from study abroad in New Zealand I realized I had no answer to the “where would you most want to go to in the world?” question, so I checked a map to see what corner of the world should top my list. Victoria Falls in the middle of Africa seemed like a suitable candidate because it caught my eye first being in the middle of the map and seemed like a place that would take a couple years to get to. 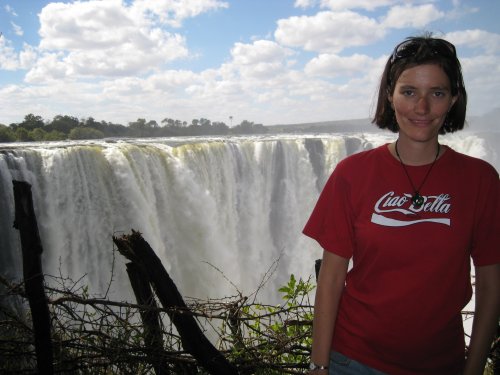 Two years later there I am, traveling  thousands of miles over bumpy roads in questionable countries, under the technical guise to see Victoria Falls.  Life is really funny sometimes isn’t it? 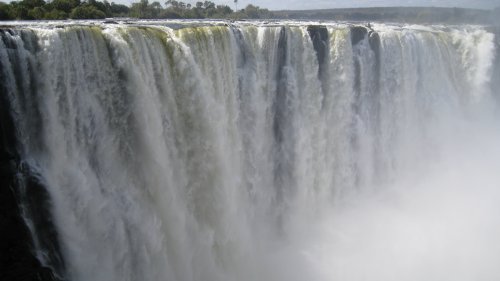 So anyway, the Falls.  Because most people have been to Niagara Falls it’s easiest to describe them based on Niagara- they’re officially taller but I never noticed a serious difference in height.  Instead what is the most noticeable difference is the length of the Falls- imagine Niagara being twice as long and it will give you a good idea of what it’s like.  It takes about 20 minutes or so to walk from one end to the other in a nice little national park, the entire time enduring a gigantic roar so loud you can continually hear it in the town of Victoria Falls about a mile away. 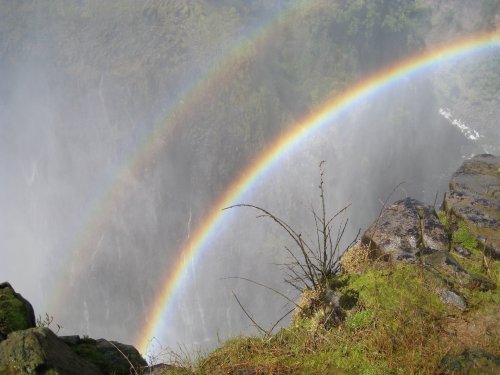 Other than dimensions, I’d say the biggest difference between Victoria Falls and Niagara is the mist.  You never really get wet while at Niagara Falls if you don’t want to- the gorge on the other side is significantly wider, and there’s probably less water going over because of the hydroelectric station- but in Victoria Falls you’re a lot closer and there’s so much mist it’s more like rain (there’s even a small rainforest, the only one for hundreds of miles in any direction!).  Some of the tourists will hence bring rain jackets or don trash bags sold by the hawkers outside the park, but Linda and I didn’t realize this would be an issue and it was a warm day so we instead got completely soaked.  But the rainbows created by all the mist were quite lovely…

Me in my “looking like a wet rat” phase after getting soaked by the mist in front of the famous Victoria Falls bridge, linking Zimbabwe with Zambia (we never went to the Zambia side because it was an additional $45 for that visa and Zimbabwe has most of the view).  The bridge was originally built at the turn of the 20th century by Cecil Rhodes to link his mining fields to Southern Africa and as part of his (never built) “Cape Town to Cairo” railway scheme.

A word about Cecil Rhodes because the man is the only person I know to have two countries named after him (Northern Rhodesia and Southern Rhodesia, now Zambia and Zimbabwe respectively), and I suspect having even one country after you is grounds for being a little crazy.  He started out in a little diamond business called De Beers, and was briefly Prime Minister of the British Cape Colony until forced to resign because of an attempted take over the Boer colony of Transvaal (ie where the Boers discovered gold) which failed miserably.  Undaunted, Rhodes managed to consolidate de Beers to control the diamond market that still exists today, partly by going north and creating colonies by getting mining concessions from tribal chiefs in his former-namesake countries, most questionable at best, then forcing the native tribes to give him cheap labor through taxes in a system Mark Twain dubbed “worse than slavery.”  Rhodes was an imperialist because he believed the Anglo-Saxon race to be the most superior on Earth- in fact, he included the United States in the famous Rhodes scholarships because he wanted to breed an elite of philosopher-kings who would get the US to rejoin the British Empire.

Ok, so Rhodes was probably a combination of crazy and a product of the colonial mindset (“the white man’s burden” and all that).  Regardless, it is hard to find a man who shaped modern African history more.

Except perhaps this guy could make an argument for that title- Dr. Livingstone, I presume?  Livingstone was a Christian missionary and explorer who among other things was the first white man to glimpse Victoria Falls.  He accomplished all this by traveling light and (gasp!) respecting local chiefs he met which caused everyone to say he was crazy.  The famous quotation was uttered by the journalist Henry Stanley who was sent to find Livingstone after he’d been missing for four years or at least allegedly uttered- Stanley tore the pages out of his diary detailing the encounter.  Either way, Livingstone intentionally or unintentionally set in motion the European colonialist movement in Africa, and in turn the mission schools whose foundation inspired ended up educating most of the leaders of independence movements on the continent years later.

So there it is, I have finally been to the place I most wanted to visit on Earth.  Which leads to an interesting question- what should I choose as my place I most want to visit in the world next?  I’m not sure yet but I’m tempted to continue the waterfall theme and say Iguazu Falls on the Brazil-Argentine border- after all, I have never been to South America…

This entry was posted in RTW #1, Zimbabwe. Bookmark the permalink.