For all two of you who still check in here wondering if I’ll finish discussing my adventures (not my fault, I swear! blame CWRU Physics!), here’s a bit about what it’s like to do the world’s tallest bungy jump.  With photos because for the first time on my trip I copped out and bought the CD that had ’em.

This is the Bloukrans River Bridge, which is the largest single-span arch bridge in the world at 272m for its central span.  It’s also 216m down to the bottom, so let’s jump off of the darn thing shall we?  Because that’s what all backpackers do in this part of the world, or at least talk about doing…

The important thing to recall about me and bungy jumping is I’ve done this before- a comparatively much more tame 74m jump off the Kawaru Bridge near Queenstown, New Zealand.  I  liked it so much that I was keen to do it again, and typically don’t get too scared about this sort of thing so long as I have sufficient time to analyze it in my physics-y sort of way.  Just a bouncy spring, right?

(Note: God help any students I ever get to set intro physics exams for.  They will all be problems about zipline collisions or bungy jumps or paddling whitewater and the like, so whenever they complain about what the point is I can flail my arms and shout “this could save your life someday!”) 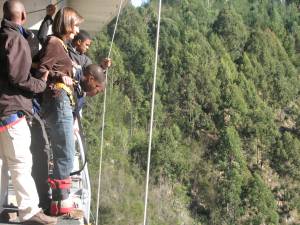 Claiming you are in control of your fears only goes so far tho, as you still have to jump.  When it comes to adrenaline activities by this point in my life, I freely confess the taking initiative parts are very much driven by the “wow that girl looked like an idiot who stood there for a few minutes freaking out, don’t want to be her” approach.  Plus c’mon, if you paid as much as you did you’re gonna do it anyway! 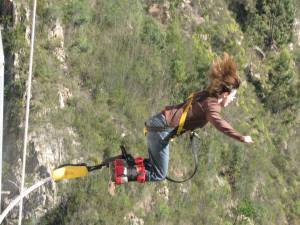 And she’s off! Woo!   Time to freefall for a few seconds, the exact amount which will be determined by my physics students someday in the future! (About four or five… in ideal physics land it’s 6.7 seconds to 216m, but obviously one hopes they made the cord somewhat less than that.) 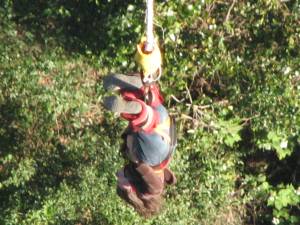 Um, ok.  So this is the point where I freaked out.  See physics is all fine and good, but logic will fly out the window when you begin to feel on your rebound bounces  that your legs are slipping out of the harness.  I kid you not!  Later I realized there was an emergency cord on my chest so I wouldn’t have died obviously, but panicked minds do not think of such things while dangling headfirst several stories above the South African forest.  Rather, they get a huge terror-stricken sense of foreboding while thinking “oh pleasepleasepleasepleaseplease…” directed towards no one in particular (this being proof that I will never be religious).

This is noteworthy because this was the only time I was actually scared on my trip- there were some situations that worried me, yes, and some which filled my heart with concern, but nothing else in that AHHH!!! feeling of absolute dread.  Which left me a little shaken up afterwards more because I was worried I was losing my cool until I remembered normal people don’t hold it against you if you freak out on the world’s tallest bungy jump.

Saved!  Getting pulled up at the end of the jump- a guy comes to pull you into a sitting position before they pull you up.  Up at the top I mentioned the “it felt like my feet were slipping out” thing to the guys in charge who had some line about how this was normal they just didn’t tell people about it as they’d worry… but then no one else I ever met who did the Bloukrans jump experienced the same thing.  So hmm, not gonna dwell on that, except to state that I am announcing my retirement from bungy jumping.  Because I’ve done the biggest one in the world now anyway, and can’t think of a good reason to get so freaked out again!  I know, I’m such a wimp…

This entry was posted in RTW #1, South Africa. Bookmark the permalink.

4 responses to “Bungy Jump of Doom”