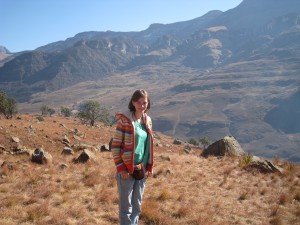 Trivia fact of the day- whenever people think of Lord of the Rings they think of New Zealand’s mountains, but those are not the ones that inspired Tolkein. Rather, it turns out he was born in South Africa and lived in the Drakensberg Mountains for several years as a child, so when he envisioned Middle Earth he was actually thinking of here. So how could one not visit a place with such stellar literary commendation?

There are so many lovely spots in the region that they become commonplace- this waterfall was just next to where I was waiting for the bus in a town called Pietermaritzburg. Some bus stop!

A lovely sunset view from the hostel I was staying at. Most of the people around here are ranchers of various capacity, so the sunset was particularly spectacular due to smoke from controlled burns in the area just before the dry season.

A word about the backpackers I stayed at by the way because it was yet another neat place in South Africa I wished I had more time to spend at, called Khotso Backpackers. It was de facto a working family ranch that let rooms to travelers, complete with a sheepdog to guard the livestock against leopard attacks and the family crowding around their Ham radio every night to talk to those away on a several day horse trek. Sort of Wild West meets Africa I suppose.

When not actively trying to sneak into the house Simon is always looking forlornly at it in hopes that someone will come hang out with him in a very non-horse way. And I’ve gotta say it’s somewhat disconcerting after awhile- can you imagine opening the curtain sleepy-eyed in the morning only to jump back, wide awake now, because there is a horse staring at you on just the other side of the glass?! I’ve seen far less creepy scary movies started under much more dubious circumstances, let me say that much!

Anyway, these are some of the more sane and cuddly inhabitants of the ranch- baby lambs! Specifically these are the ones whose mothers rejected them upon birth for whatever reason, so they get to spend the night sleeping in the shed as well as getting bottle-fed until they get bigger.

Me holding the sheep I bottle-fed. Excuse the milk on his head, it turns out lambs are plenty cute but also plenty dumb.

More on the Drakensberg later because the scenery is just amazing. Plus I got to go to my last new country of the trip while exploring it…

Nothing to do with my travels specifically, but I thought this was really awesome and travel related so why not share?

In short, data for one 24 hour period showing the flight paths of all the planes in the world.  Absolutely mesmerizing- keep an eye out for all the planes arriving in Europe at dawn, the shift in direction at night on the trans-Atlantic route, the early morning flights from Hawaii to the mainland, and a million other details.  Just awesome.

Dinner at the Village

One night the Coffee Shack hostel organized supper at a local Xhosa village a few miles away from town.  Sounded like a great way to kick off the evening, so off I went.

First thing’s first, gotta distribute the beer to the guests!  This stuff is very obviously homebrew and made from corn, a dead giveaway because the main taste was a very corny, yeasty one.  One of those things that you’ll generously try a few sips of the first time the bucket is passed around, but smaller and smaller sips as it keeps coming around… Also, it turns out traditional African beer is very non-alcoholic in content and the locals are more into it because they’ve developed a taste for it/ in places where you can’t guarantee water quality it’s best to drink fermented stuff.

A bunch of kids in the village who were demanding I take pictures of them while posing for the camera so they could see themselves on the view screen afterwards.   So I indulged. 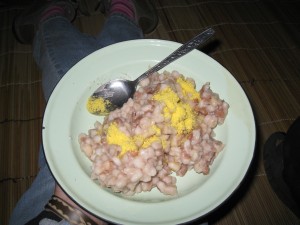 Ok, time to get into a hut for dinner!  And yep here’s what most villagers eat day in and day out in this part of the world, boiled cornmeal with varying types of spices  on top.  Exciting?  Can’t pretend my plate was finished because I wasn’t a real fan, but it did make me sympathetic to people who have no choice but to eat such a non-varied diet every day!

There was also a second course, which was mealie-meal with a mashed potato-type quality, some brown sauce, and some boiled greens on the side.  Meat is only for special holidays in this part of the world.

Food’s done, time to dance! This first one was done by the boys and basically consisted of walking around with a stick in hand.  It should be noted that there were virtually no men older than my age in the village- due to economic necessity most families live here while the father works in Johannesburg, with the father spending maybe a month at home during the year while the wife may visit him in Johannesburg once or twice as well depending on the family’s situation.

Sort of related, I also got into an interesting conversation with an older woman about Xhosa bride-prices: in this part of the world the potential groom’s family has to pay a certain amount of cattle to the bride’s family in order to marry her, depending on how hardworking and  how much income the woman can bring to her new family in the future (traditionally marriages are arranged, but nowadays most guys will tell his family of his girlfriend so the marriage can be arranged).  If you have a reputation for laziness you’re not going to bring much of a price, maybe only seven cattle, but a woman who has a nursing certificate or some such can fetch twice as much (the highest bride price I heard of was a man who worked several years to get 23 cattle to wed the beautiful daughter of the chief who was also a teacher).

“So how much would I get?” I asked, and was subjected to a look of frank appraisal.

“You’re beautiful and probably well brought up and undoubtedly educated so you could bring in income,” she  began, “but you probably don’t know the first thing about pounding mealie meal or how to build a rondavel so that would count against you. ” She then concluded that my father should not accept any offers on my behalf that were less than 15 cattle as a starting point, and he  should do it soon because I was about five years past the average Xhosa marrying age.  Good to know!

Last but not least the girls  danced, a lot better than the guys I should note, and turns out I could hold my own with the Xhosa gals.  Maybe we can up that bride-price to sixteen cows in light of that information?

As a final note, the night was a lot of fun but my favorite part was when the traditional music was pierced by the jingle of someone’s cell phone.  Before I could cringe that one of my fellow backpackers was being so disrespectful one of the white-skirted girls jumped out of her seat and ran outside with her phone to answer it.  Mind this village has no electricity so I was surprised that a pre-teen had a cell phone- hell I didn’t have a cell phone then!- but the villagers looked at me like I was an idiot when I asked how the phones got charged.

“At the store,” I was told matter-of-factly, as it turns out some area entrepreneurs will charge a phone for a few Rand each time.  Lack of electricity doesn’t stand in the way of progress!

Anyway, to finish the story after a few moments the girl came back with her phone which obviously had a text on it, and immediately had a pow-wow with her friends over the meaning of her latest social development like girls do the world over.  People are more alike the world over then we acknowledge, and don’t let anyone tell you differently.