Johannesburg is the sort of place that freaks the hell out of other South Africans when it comes to crime, so you know when other South Africans are concernd about a place it’s time to pay attention. (“I would never live in Jo’burg- the people act like prisoners in their own homes while the criminals walk free!” is a common sentiment, followed by a favorite crime-riddled anecdote.) So I wasn’t particularly raring to go there but had to as the plane home flew out of Jo’burg, so this city got to be the last destination on my round the world trip and the first with crime statistics worse than Cleveland.

And actually it turns out that if you’re careful in Jo’burg and stay in a hostel in a wealthy suburb it’s just as generic as any other Western suburb you’ve been to, the only major difference being all the locals who wanted to go out to eat would drive to a mall where there was secure parking and the trendy cafes spilled out onto the atrium. Just like anywhere else but indoors! And because I don’t like malls at home so I can’t imagine hanging out in one my last day in Africa, I spent it instead on a trip out to Soweto.

Soweto is an abbreviation for South West Township and really is a city in itself with well over a million people (it used to be, but now counts as a district of Jo’burg). It is the most famous of the South African townships due to its size and the anti-apartheid uprisings that happened here. Nowadays, thank goodness, things are getting a bit more normal and at a faster rate than other townships in the country. 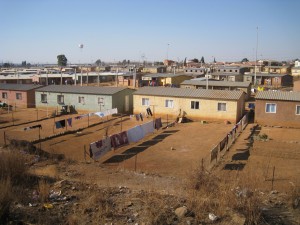 Typical houses in Soweto being built by the government lately by the millions. They’re not entirely inspiring, until you remember what the standard was up until a few years ago and still is in most townships around South Africa-

Everyone thinks of shacks like these when they think of the townships, but believe it or not these are some of the last in a township of 1.3 million people. The goal was to have new houses built for everyone by the World Cup this summer actually, but I’m not sure how that schedule is going…

The iconic power plant in the heart of Soweto (if such a structure can be iconic), which interestingly did not power the district at all during apartheid as most people didn’t have electricity in the first place.

Anyway, it turns out when you go to Soweto as a white person you do a couple things, like visit a fish and chip shop, look at the largest hospital in the world, and walk down the street where two Nobel Laureates lived (Desmond Tutu and Nelson Mandela), but invariably someone inquires about going to a sheeben (bar) so that’s where we headed-

Complete with heart and liver on the menu that we didn’t try, but giant Castle beers which we did!

And last but not least, the giant football stadium on the edge of Soweto which will host both the opening and final match of the World Cup this summer!  And believe you me everyone is beyond excited to show the world what an amazing country South Africa is. Which reminds me, I still need to pick a team…

And that’s a good note to end on because above all things Soweto struck me as a place in flux more than anything- yes it has a history of struggle and desperation, but things are changing quick and I guarantee I will not recognize it in a few years.  And all in all, that struck me as a marvelous thing.

And so things ended, and I went to catch my flight out of Africa.

This entry was posted in RTW #1, South Africa. Bookmark the permalink.