Parisian Churches and a Foucault Pendulum

I’m not a particularly religious soul, but it’s hard to go to Paris and not find yourself in a church at some point and not be wildly impressed with them isn’t it? 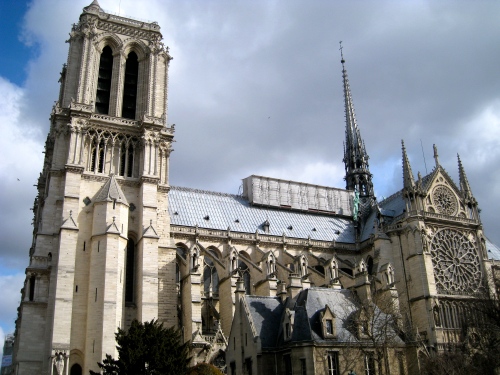 To start off with the obvious one, Notre Dame de Paris.  What always amazes me is how long these cathedrals took to build- nearly 200 years in Notre Dame’s case- and how they started building them nearly a thousand years ago (1160A.D. here).  Talk about dedication!

And then you step inside, and you understand why.  It’s glorious, filled with light and space that leaves you with an urge for nothing more than to sit and let your eyes wander.  I was in awe and I am someone who has been to more countries than I can keep track of and plenty of cathedrals at that!  There’s no doubt in my mind that if I was born a few hundred years old without having science to explain even something like how the planets move or where humans came from, and then see a marvel like Notre Dame, that I would be a believer. 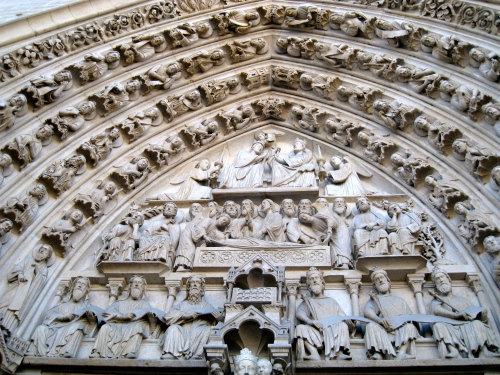 The carvings above the door you exit Notre Dame from these days, on the West side of the building.  Just amazing.

Moving on to another famous Parisian church and the national cathedral of France, the Pantheon!  (Which I keep confusing with the Pantheon in Rome, or the Parthenon in Athens. *sigh*) A bit younger than Notre Dame, dating to the 18th century, but a bit more modern in several ways. 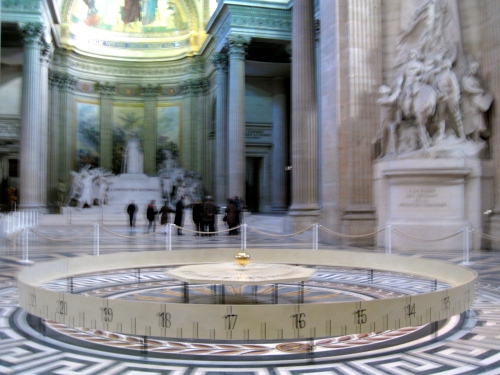 The first thing you notice inside the Pantheon (beyond the fact that I’m apparently incapable of taking a non-blurry picture) is the pendulum- to be precise it is a Foucault Pendulum named after the French physicist of the same name.  You have seen them in every science museum known to man, and the take-home lesson is that you set the pendulum to swing one way while the Earth turns underneath it so the pendulum seems to change direction over time.

Ok so Foucault pendulums are awesome and all but let’s think about this for a second- this is the national cathedral of France.  No crosses in sight or incense or any of that, but rather a symbol of enlightenment and scientific progress dominates the scene.  We have certainly come a long way since Notre Dame, or at least the French have. 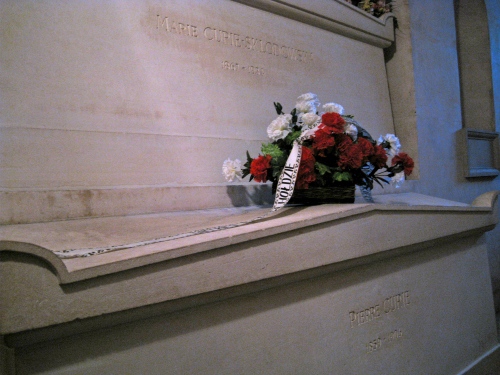 In the grand traditions of European nations, the French inter their most noteworthy citizens in their national cathedral.  An idea I have always liked to be honest and I sorta wish we had a crypt under the US National Cathedral, but no one listens to me… Anyway, part of the interest in these national tributes is the impromptu history lesson you embark on as a result, finding the plaques to Victor Hugo, Voltaire (did he have a last name or was that a pen name?), Louis Pasteur… I ran into a snag when I discovered there are not one but two Carnots interred here, one I know due to his work in thermodynamics and one who I later learned was the fourth president of France, so I payed my respects at both to cover my bases.

The picture above is of Marie and Pierre Curie’s resting place- apparently they were only moved here in 1995, but it was undoubtedly a wise move.  How could you not inter the first winner of two Nobel Prizes? (Btw do you know which it was?  Marie because she got chemistry in 1911 and her husband died five years prior.)

So those were the churches, the old transitioning into the new.  And no I am still not over the Foucault pendulum in the Pantheon- isn’t it amazing that we now know how stuff works?  Up until a few hundred years ago, the smallest fraction of the million-odd years we’ve been on the planet, you just had no chance of knowing our place in the universe no matter how badly you wanted to know the answer.  But now we do, along with a million billion other things you just plain never would have had a chance to know until recently.  We’re very lucky.

This entry was posted in France, Science!. Bookmark the permalink.

4 responses to “Parisian Churches and a Foucault Pendulum”