The amazing thing about the United States that I don’t think many of my friends abroad fully realize is just how different things are region by region.  This shouldn’t be terribly surprising- Cleveland to Atlanta is roughly the distance between London and Berlin, and we all know how much things change in that stretch- but the long and short of it is I can step off the plane in the Deep South and suddenly the Civil War is the War of Northern Aggression and people talk a version of English I can’t say I’m truly familiar with, and it is wonderful.  The fact that Atlanta actually has amazing places to eat and drink and I was lucky enough to do it with awesome people certainly never hurt either.

The difference begins at breakfast, which in this particular case was a local diner known as the Flying Biscuit.  Beyond the fact that the biscuit and apple butter combination was as good as you’d expect from a diner’s namesake, what is different here than what you’d get “up North” is that little bowl.  Yep, filled with what were actually called “creamy, dreamy grits.”

To be fair I like grits- it’s basically like polenta but a different flavoring, and often has cheese in it.  Plus you can start breaking out the My Cousin Vinny quotes, so what’s not to like?

Another important local item for consumption, Sweetwater Beer! (Yep the picture quality was bad- sorry, iPhone picture!) Another strange thing about America that foreigners don’t get- yes the Bud/Coors/Miller Lite stuff tastes like crap, but that’s what you should expect when you’re trying to make a beer to please 300 million people.  Local breweries on the other hand make some of the best beers in the world- every region has its own craft brewery that is actually quite tasty (Great Lakes Brewery here in Cleveland has won several awards for example), and down in Atlanta that brewery is Sweetwater.

This picture was snapped on the Sweetwater brewery tour we did on Friday by the way- Georgia has a curious law that a brewery can’t actually sell its own wares on its property, but a brewery tour followed by tastings is permissible so that’s what we did. (Liquor laws vary by state: for example you can’t buy any alcohol on Sundays in Georgia but you can after noon in Ohio, whereas in Pennsylvania you can all Sunday except you can only buy wine/liquor in one store and beer in a beer dispensary store unlike most states where you can buy alcohol anywhere.  But Ohio wins because there are drive-thru liquor stores here. Got that?)

If you’ve never heard of the local ale though I’m sure I can find you one that you’ve been drinking all your life- yep, Coca-Cola is headquartered in Atlanta!  We didn’t go into the World of Coca-Cola museum behind us- we spent so much time in the aquarium that it was only open for an hour and had $15 admission, and we figured Coke had already gotten enough money over the years from us.  So we posed with Coke’s founder John Pemberton instead- left to right is my hostess Eszti, an old travel buddy of mine named Nicole, and some damned Yankee who was clearly super-excited that it was still sundress weather in Atlanta.

Making another bronze friend in Centennial Olympic Park, in this case Pierre de Coubertin who was the founder of the modern Olympics.  Atlanta hosted the 1996 Summer Games of course, most famous for a terrible mascot, every girl my age wanting to be Kerri Strung or Dominique Moceanu, and the bombing that occurred not too far from here.

So expected local and international fare aside, on Sunday Eszti and I took a walk to explore a bit by foot as well.  Unfortunately Atlanta’s biggest flaw in my eyes is the fact that you hardly ever walk or take public transport places by the way- everyone drives almost everywhere, meaning you can encounter gridlock even on a 14-lane highway on the weekend, and that would drive me nuts.  But anyway…

A pretty butterfly in an equally pretty garden along our route- Eszti was patient enough to wait a little while with me while this guy flitted around and I’m glad she did, as I love how it turned out!

Um, ok.  Somehow our walk ended up at the Lake Claire Community Land Trust, which amused me partly because hippies are amusing and partly because I wasn’t expecting there to be all that many in the South, though the casual “y’all” on the sign obviously gives it away.  To be fair this land trust was in a bit of a ritzy area near Emory University so a lot of the people around here I guess are flower children who sold out, but it was still fun to wander around and see what there was to see- 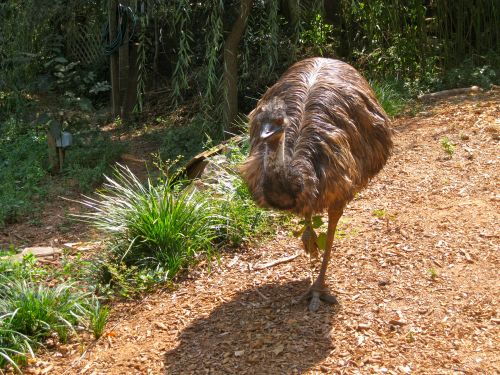 Like this guy, Big Lou the Emu.  There was no good explanation given as to why a hippie collective land trust in Atlanta would have an emu, but it was a delightful surprise so I wasn’t about to start complaining! 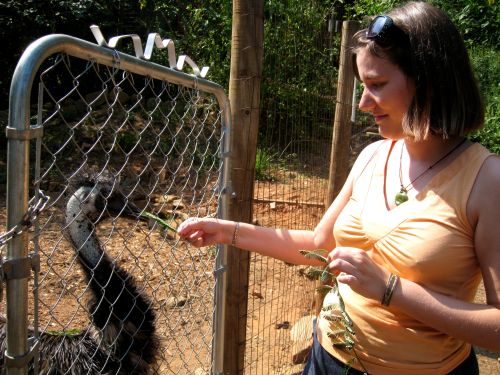 Feeding Big Lou some greens from a garden. I can’t say I was planning to come to Georgia to feed an emu, but I’m glad things worked out that way!  Maybe that’s why traveling around the USA can be so much fun- you know things are different both in ways good and bad, but there’s still always the capability of finding something unique where you least expected it.

This entry was posted in America (United States Of), Georgia. Bookmark the permalink.

One response to “Exploring Atlanta”