My First Day in Africa

It took 24 hours to get to Zanzibar but the thing I noticed first was the heat (second being, of course, the $100 visa fee for US citizens). It’s summer here, meaning hot and sticky on the tarmac, and discovering the power was out in Stone Town due to a windstorm so there would be no fan or A/C at my guesthouse wasn’t going to be very pleasant. It was probably a good thing I was much too tired to notice the heat that night!

But not before going out for a wander, of course. 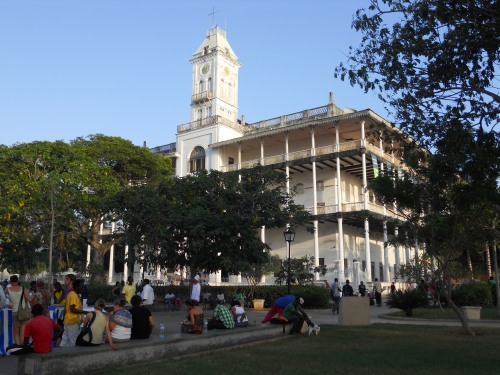 Stone Town is the capital of Zanzibar, and is an eclectic mix of Muslims, Christians, Hindus, and everyone else who might’ve wanted to round the horn of Africa in the past few centuries and wanted a break on the spice island. The architecture and current residents certainly show this and I liked it right off, as Stone Town is straight out of your “exotic locale where important things happen in action movies” sets. It’s hard not to be smitten with such places, and I kept an eye out for Nazi spies just in case! 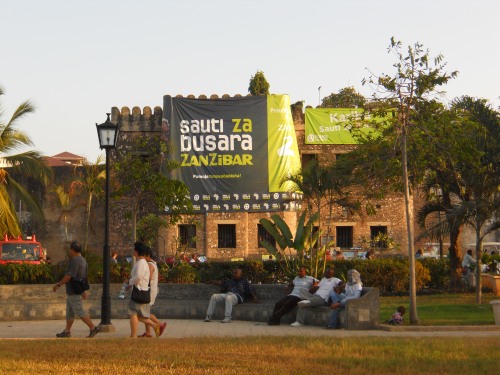 The old fort in Zanzibar, currently the scene of a music festival that is one of the most popular in all of Africa. I didn’t go because rooms are so hard to find in Stone Town at this time (and I went to bed at 8pm the one night I was there), but it meant the place was packed at the seams with people all about. Lots of things to see, but the smells led me to the night market where it was time to find dinner- 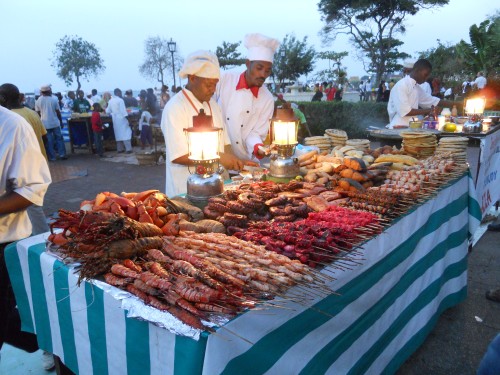 The food market was one of the neatest things I’ve seen, as locals and tourists alike gather to indulge in seafood, “Zanzibari pizza” aka crepes, and spicy curries. I ended up picking this seafood one because it seemed quite popular with both locals and tourists and settled for a shrimp skewer, a lobster meat with local flavoring one, and some local bread that’s similar to but more doughy than Indian na’an. The lobster wasn’t up to my taste, but the nice thing about this part of the world is one can experiment when the lobster was about US$4…

Another experiment was washing this meal down with sugar cane juice, which is made by pressing it through the press as you can see above. I’d never had it before and don’t think I will again, as it’s sweet like a soda but has a strange thick consistency that I can’t say I like much. But how could you not try it, right?
(Before anyone asks, I suffered no ill effects from this or any of the food I’ve eaten in Africa thus far. My experience has been that Asia is far worse in such regards for whatever reason though.) 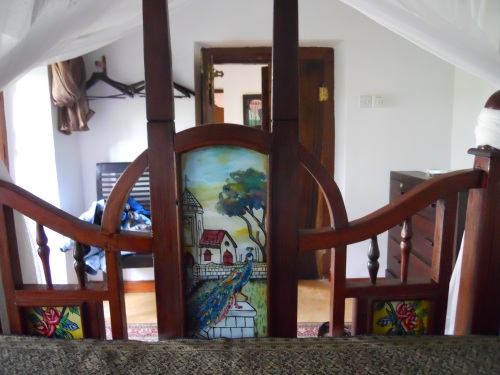 Finally, tummy full and nibbling a mango for desert on the walk home, I collapsed in bed and didn’t wake until the roosters did at dawn. I include this picture because I rather liked the paintings on the bedframe, and to prove to my parents I actually do stay in “nice” places, it’s just the nice places are a pittance compared to back home! (The door was the coolest thing about this room though- it was an old Zanzibari style one, meaning it was split into two smaller flaps that were just wide and tall enough for me to step in with about an inch to spare. I don’t know what tall people do who visit Zanzibar.) Ciao!

This entry was posted in RTW #2, Tanzania. Bookmark the permalink.

5 responses to “My First Day in Africa”