The Tale of the Nungwi Turtles

Once upon a time in the faraway magical island of Zanzibar where the palm trees sway over turquoise water lived two brother sea turtles, Green and Hawksbill (though we shall show a picture of Mr. Green Turtle here)-

Hawksbill and Green were happy to spend their days swimming and feeding off the coral reefs of Zanzibar- Green enjoyed seaweed very much, athough Hawksbill had a taste for seafood- as did their turtle cousins froom around the world. Lately, however, things had begun getting dire indeed for the Turtle family as the people also discovered they loved the beaches and waters just as much as they did, and built houses with lights that confused baby turtles searching for bright moonlight to follow to the ocean after hatching. Things were even worse in Zanzibar, where some people had the idea of hunting the turtles for their flesh and shells, and Green and Hawksbill and all their sea turtle cousins found themselves in a frightful category known as “endangered.” If nothing was done, the sea turtles might disappear from Zanzibar forever!

To solve this problem Green and Hawksbill went to the people with a proposal- “if we are going to live together we need your help. No more hunting us for our shells and meat and make sure your fishermen know this, and we need a place for our children to grow until they’re older and for our old to go into retirement when they can’t defend themselves anymore.” The local people agreed, and founded the Nungwi Aquarium and Turtle Conservation Project on the northernmost tip of Zanzibar. They taught the fishermen how rare the turtles were and even offered to pay for live turtles brought to them instead of killed, and converted a natural saltwater lagoon into a protected pond for the turtles’ offspring.

Some of the turtles were very big, like the 100 year old Nelson Mandela who could no longer survive in the wild due to an injury from a boat’s propeller, but most of the 70-odd turtles who lived in the pool were 1-2 years old. How they looked forward to the full moon once a year where they would graduate from the pool and be released into the ocean! (It’s in just a few short days actually, so they are really getting excited right now.) 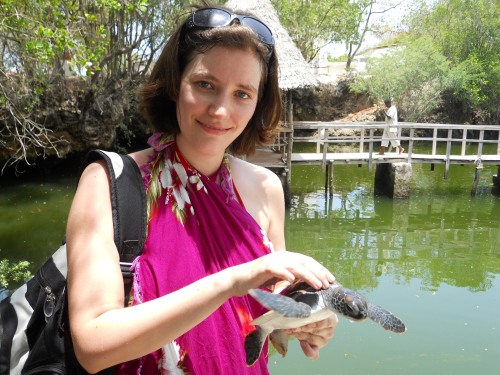 The little turtles who were less than a year old were also looking forward to graduating into the big pool soon from their small one. Until then they had lots of visitors to pass the time, who were more than happy to provide neck massages the turtles were secretly crazy for.

The baby of the aquarium was Mr. Lucky, who was only a month old. Some fishermen had arrived on the beach the morning he was born to discover a nest had hatched, but by then he was the only one left. Because only a small handful of turtles survive infancy as most are eaten by predators, he was very lucky indeed to be found!

As a final note, Green and Hawksbill want to remind you that their story isn’t one with a “happily ever after” yet, and we don’t know if it ever will. But they hope very much with the help of the people who are their friends like in Nungwi (who do a stellar job with aa $5 entrance fee well worth it) their children and ours will still be able to play in the turquoise blue waters forever.

This entry was posted in RTW #2, Tanzania. Bookmark the permalink.

One response to “The Tale of the Nungwi Turtles”