Bad news: we’ve been in China for about two weeks now but last week my camera became missing and by now presumed stolen… with all my pictures from the week spent in Hong Kong still on it. This had just about as great an effect on my mood that you’d expect particularly as I liked Hong Kong as it was so photogenic- I always thought Chicago was the best city in the world for skyscrapers but no, it turns out Hong Kong wins by a mile. Particularly at night when all the buildings light up, you’ve never seen as beautiful a modern wonder as the Hong Kong skyline…

The good news is thanks to traveling with my brother Patrick the blog is not completely photo-less as he takes quite a few onto his iPhone and lent them to me with my many thanks. Not the same, but what cannot be cured must be endured (or at least until this blog catches up to our time in Beijing as I bought a new camera today) and a guy with a camera in his hand can actually sneak unique shots thanks to stealth- 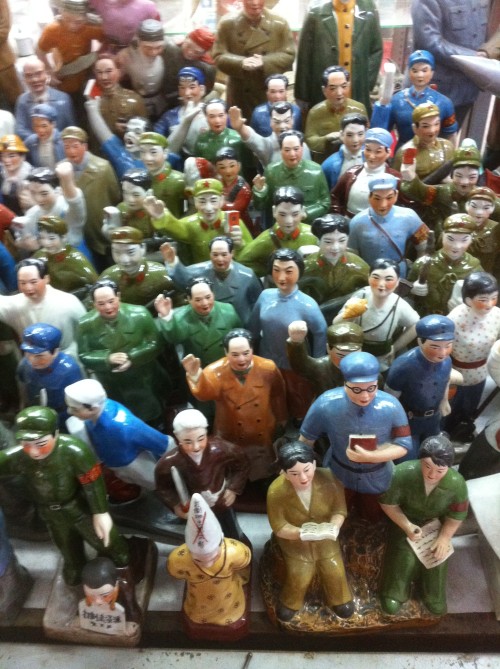 Such as, for example, one of the commie statues for sale on Hollywood Street, ie the go-to place in Hong Kong (if not the world) if you’re in the market for Chinese antiquities. So many people came here fleeing with their treasures which they were forced to part with for only a few pennies that the shops are filled with all sorts of fascinating things such as this miniature army of revolutionaries. 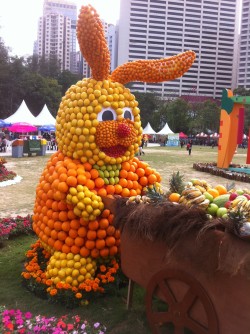 ﻿﻿﻿﻿﻿﻿﻿﻿﻿Another figurine of sorts (though as tall as a person) spotted at the Hong Kong Flower Festival in Victoria Park which was coincidentally going on the same week we were in town. Mr. Bunny was made entirely out of fruits and veggies a la the Pasadena Rose Parade- according to the Chinese calendar this is the Year of the Rabbit by the way, meaning bunny pictures everywhere. You always instinctively think it has something to do with Easter coming from a Western culture, though I confess I have no idea when Easter is this year!

Another entertaining phenomenon of the flower festival was how it turns out amateur photography is a very popular hobby in Hong Kong (and in greater China for that matter, although the average person doesn’t have as much funds to dedicate to it) so the show was packed with people elbow to elbow for that “unique” shot of a tulip or what have you.  I’d crack a joke but presumably these people are smarter than me and did not lose their cameras recently, so let’s move on…

﻿﻿﻿Our preferred mode of transportation in Hong Kong was a rather iconic one as we stayed on the lively Kowloon peninsula instead of the business district- the Star Ferry, which has been in operation for well over a hundred years. For less than a dollar US the ferry will take you across on a pleasant ten minute journey (my favorite detail was observing how the seat backs on the ferry benches are cleverly crafted so one push makes it a front or back facing seat as required).  Despite the high volume of traffic no bridges connect the peninsula and the island- there are subway, train, and traffic tunnels to be sure, but take the ferries away from Hong Kong and the system would fall apart.

The transportation system in Hong Kong is an absolute wonder by the way, but when you have  7 million people crammed into one of the  most dense populations in the world you have no choice!   Even the “expensive” subway was about US$2 to the end of the line and a train would arrive within five minutes of waiting even outside peak hours which was convenient and needed as the cars were liable to fill up.  But what do you expect from a city so densely packed that an outdoor escalator is an important part of public transportation because it carries several hundred thousand souls a day?

I’ve met a lot of people who told me they didn’t like Hong Kong, dismissing it as a “concrete jungle,” but one of the pleasant things about the world is we don’t all have to agree.  If you love cities there is just no way around the fact that no city in the world is like Hong Kong in many a unique and marvelous way- trust me, just be sure to back up your photos early and often afterwards.

This entry was posted in China, Hong Kong, RTW #2. Bookmark the permalink.

One response to “Hong Kong Wanderings”