Noticing the Differences in Nepal

I’ve been in Nepal a few weeks now, but before I get into what I’ve been up to specifically I wanted to do a quick little mention of a few things I’ve found different when compared to home. This is because my brother Patrick flew home to the United States from Kathmandu two weeks ago and one of his first messages back to me was something on the lines of “it’s really weird to finally be able to drink tap water and throw toilet paper in the toilet!”

Indeed- and for those who have never been in this corner of the world, often plumbing is too delicate for paper in Asia so it goes in a wastepaper basket instead. Oh, and in Tibet the toilet paper was sans hole in the middle so you’d get more product- see what I mean? Clearly I need to point out a few things that are normal over here but are strange back home before I forget… 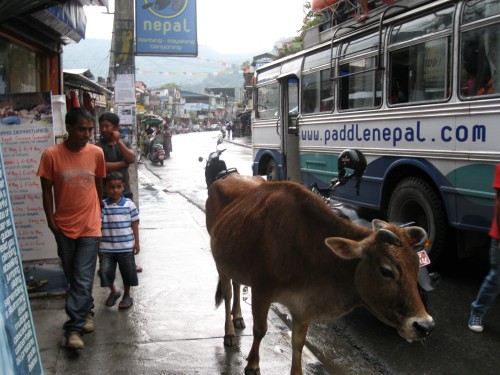 Anyway, to begin one thing that is worth mentioning post-China is the Himalayas are a cultural as well as natural border because Nepal aligns itself with India more than China in that regard. There is a healthy smattering of Hindu, you don’t use chopsticks and the food itself is more Indian than anything (Nepali food itself is unfortunately kinda bland), and yes there are cows freely wandering in the road. The latter is a never-ending source of amusement because they’re so oblivious to anything going on around them because they know no one’s going to hurt them.

Also while I’m at it, for me culture shock is often not so much getting into a situation so much as then realizing what is different when you’re no longer there. In another China versus Nepal move, while both countries have a mess of kids wandering around as a default the ones in China were typically aligned with their schoolfriends whereas the Nepali kids actually have brothers and sisters. And let me tell you this is beyond awesome and adorable and I never truly realized how strange the one child policy is until seeing the bond between brothers and sisters playing or taking care of younger ones etc etc, and how strange it must be to grow up in a nation where no one has a sibling.

Moving on though, Nepal is without question cheaper and filled with much more poverty than China. You can always tell in a country how rich or poor it is based on the cost of the local newspapers and here they are 3 Nepali rupees (another thing that makes me giggle thanks to Zelda- I finally made it to a country that uses rupees!), and at 70 rupees to the dollar this comes out to what, four cents? I’ve really never encountered one this cheap- and the cappuccino was about 200 rupees for anyone interested, doughnut was 40. 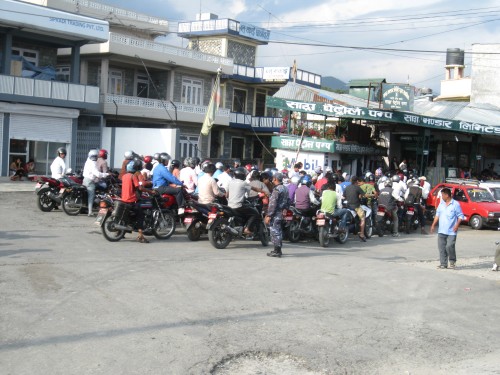 Also, the country is a bit more, um, volatile than I should describe in detail on a blog I know my mother is reading. The big example lately is the fuel crisis- there was an impasse reached with the main distributor in India so you know you’re getting close to a working petrol station (yep, petrol not gas here, thanks Brits!) because there is a line of motorcycles and cars stretching around the block. I am told it takes at least 2-3 hours to get your tank filled, which has provided additional insight into how much the shortage in the 1970s in the USA must have sucked.

Also, it should be mentioned that virtually all the cars wrapped around the block are taxis rather than private vehicles, as those are just too expensive for pretty much everybody. Instead the majority of the vehicles on the roads are actually buses and trucks painted elaborately in the Indian style and with horns that play little tunes when they honk (which is, of course, all the time between the sharp turns on mountain roads, trying to navigate traffic, and cows). I am rather partial to the Indian-style paint jobs honestly because they’re really lovely, and also like the horns in that way where you realize it would probably begin to annoy once the novelty wore off.

Oh, and 95% of the vehicles on the road are made by Tata, the car company in India, and allegedly Tata is coming out with a $1,000 car pretty soon actually so there are certainly going to be more around here. No word on whether this will have any effect on the fact that it’s not unusual to spot more people on top of a bus roof than inside it.

If the fuel crisis wasn’t enough however, electricity is at quite a premium as well too. This is because the majority of power in Nepal is from hydroelectricity which means if you’re in a dry season like right now the capital of Kathmandu is subject to rolling power cuts because there’s just not enough juice in the grid. (This hydro-dependence was also a serious problem in East Africa, actually, in particular because they’ve had a severe drought these past years.) My current location of Pokhara has this similar issue too actually but not in such a great amount, but either way one of the first things you have to ask in this part of the world is whether a guest house has a generator, and naturally most do.

Anyway, due to a combination of unreliable power and poverty, Nepal is the first country I’ve been to where the tailors on the side of the road all still use foot-powered Singer sewing machines. For those who do not know just what a historical anachronism this is, my Hungarian grandmother used one decades ago but now considers it an antique, and in the United States they fell out of fashion about a century ago. Not so in Nepal!

Either way on the power, the pre-monsoon storms are actually arriving early this year (usually you’re safe until June) which every day you are treated to an hour or two of a giant thunderstorm in the afternoon which is ok because it takes the edge off the extreme humidity. The main result of this is I invariably get up early to do whatever it is I wanted to do that day because one should just assume your afternoon will be spent admiring the rain over a drink and a good book. I can’t remember ever getting up voluntarily at 7am least of all while I’m on vacation, but the roosters and dogs tend to have a little pow-wow soon after the sun rises around 6am so there we are.

So those are some of the differences between here and home- I could go on to mention the rickshaws and the monkeys and the entertaining things being hawked on the streets (“taxi-trekking-marijuana?” is the sound of a hawker quickly going through his services) but I want to get this online before today’s thunderstorm brings down the Internet. But to finish… years ago a family friend visited Nepal, and while I don’t know the full story of what he described one thing many a family member has asked me is why I want to go to a country that has shit in the middle of the road. Now that I am here, let me just say that I find it strange that anyone’s take-home message would be that of all things as what do you expect cows wandering in the street to do? And moreover it’s not much of a problem as the streets are cleaned every night, so how could this be what you notice over the cow wandering in the street?

There is some sort of “glass half full versus empty when it comes to travel” symbolism in the last paragraph but instead of dissecting it I will just conclude how much I like being somewhere so different. If the world was all the same then we would never leave home and find ways to reflect and appreciate what we have, right? Namaste!

This entry was posted in China, Nepal, RTW #2, Tibet. Bookmark the permalink.

3 responses to “Noticing the Differences in Nepal”