I Visited the Blarney Castle (but didn’t kiss the stone!)

When I visited Ireland two years ago, I shocked and confused all idle questioners by not visiting Blarney Castle. As there are only so many things to do in Ireland I did finally visit the castle, but had no interest whatsoever in kissing the stone. Why? Well firstly I already talk too much if anything, secondly if there was a place where hundreds of tourists from around the entire world put their saliva to the point where there is a damp spot on the wall would you kiss it?  Exactly.

So hey, even if I have no interest in kissing the stone myself it doesn’t mean I’m against enjoying the spectacle of others doing so, as it turns out the stone is in an awkward position so kissing it isn’t the easiest thing you can imagine.  And it should be noted that while there was a bottle of disinfectant spray it was definitely not used after each person. (I would love to get that old guy who works here into a pub though and inquire about his job satisfaction.)

Blarney Stone out of the way because that’s what most of you really wanted to hear about, I will say that even if you’re not interested in kissing it it is a nice little attraction worth your while should you find yourself in this part of the world.  Unless you drive yourself you’ll probably be going through the southern city of Cork-

Cork seemed like a nice enough spot but I’ll probably revisit Galway and Kilkenny before I find myself back here.  They do have a great local bus that goes straight to the village of Blarney ~20 minutes from the bus station right to the left of this photo, and from there it’s just a few minutes walk to the castle.

Blaney Castle is basically one of those nice medieval Irish castles (11th century in this case) that all have the same architecture of essentially a giant fortified box divided into rooms.  Proof of the giant boxy-ness-

In short, all the floors used to be made of wood but have since rotted away, so you have the great hall on top of the dining hall with the chapel being on the very top floor here (in case the pointed arch windows didn’t get it away).  These castles dot the countryside in various states of repair and it’s certainly worth peeking into one at some point, especially if you’re like me and enjoy getting into old buildings and imagining them in their heyday.  I will admit I’m rather glad I didn’t live in medieval Ireland after an inspection though, as even a lord’s castle like this wouldn’t exactly pass a modern building code. 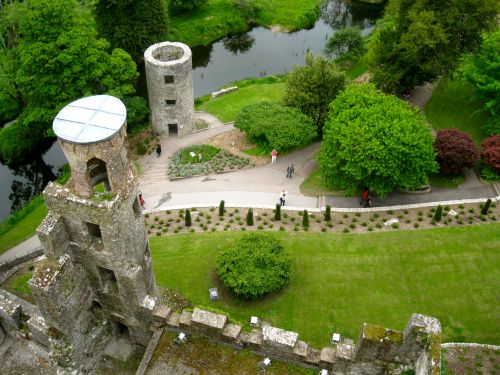 There is a quite a nice view from the top of the castle though of the grounds and fields beyond.  There is quite a bit of nice walking to do on the grounds that take just about as much time as exploring the castle, actually, from a small cave to interesting rock formations and the like.

And then, of course, once the castle is finished it’s off to the corner pub by the bus stop.  Here’s a hint, guys: I have always found the Irish to be well-spoken, but think what they put to their lips at the pub is what really does it instead of kissing the Blarney Stone.  Cheers!

This entry was posted in Ireland, RTW #2. Bookmark the permalink.

6 responses to “I Visited the Blarney Castle (but didn’t kiss the stone!)”