A Visit to Montmorency Falls 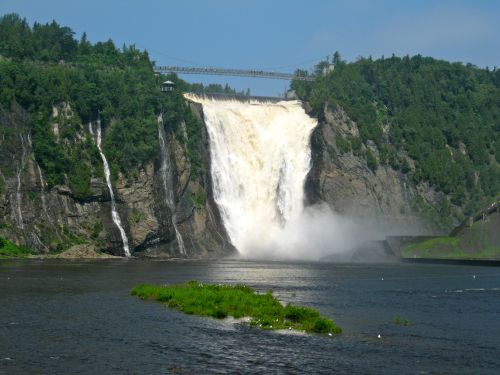 The problem with visiting a waterfall and then deciding to write about it is, really, there isn’t that much to say about them that no one finds that interesting.  I mean I enjoy visiting them and becoming captivated by rushing water, but I really can’t think of a good way to describe the interest so an audience is similarly captivated.  Just one of those things.

That said, if you find yourself in Quebec City and enjoy waterfalls without me having to explain why they’re so cool, it’s worth driving the 15 minutes or so out of town to see Montmorency Falls.  It’s actually taller than Niagara Falls by 30m (~100 feet), so certainly nice for those of us who get rather mesmerized by falling water and all that. 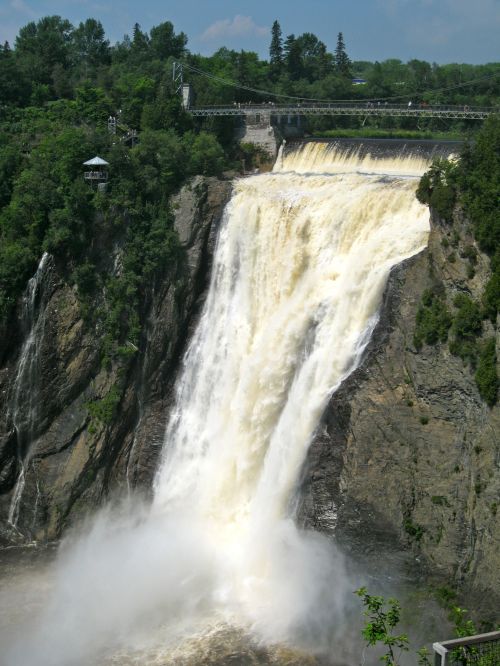 It’s rather difficult to get the scale, but the falls are 84 meters (~275ft) high, which is primarily noticed when one decides to climb up the stairs to reach the top.  Most of the signs explaining the geology etc were in French only so my Interesting and Important Trivia Facts are a bit short, though I did learn that the French word for waterfall is chute which was somehow rather pleasing to me.

The point of climbing up here by the way is how there is a rather lovely suspension bridge going right over the waterfall’s edge, so for those of us who enjoy staring at rushing water this is a rather prime observing point.  It’s one of those suspension bridges that sways ever-so-slightly too, which is exactly what one wants to think about when on the edge of a giant waterfall- 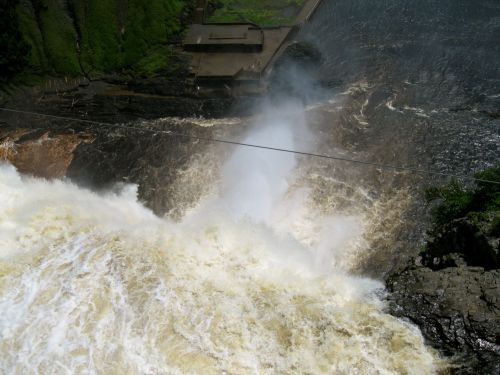 As the photo shows, the spray goes quite far out from the waterfall.  This is apparently important to note because in winter this spray freezes almost instantly, forming a giant 30m (100 foot) high hill known as “the Sugarloaf” that is supposed to be the thing if you’re an ice climber around here.  The waterfall doesn’t freeze entirely over, but enough of it does that the photos are quite arresting in that “I don’t think I want to brave the cold of a Quebec City winter to see it in person” sort of way.

Finally, after a few hours of exploring the area it was time to head back.  The only problem was the several hundred steps which I was in no mood to climb, and besides I was completely on the far side of the falls.  There was an aerial tram however, which you could pay ridiculous amounts to go up, and presumably took lazy passengers down too… and luckily the golden rule of tram tickets was in play, namely the “we check going up but not down” one.  And I got one nice final look at Montmorency Falls out of it too! 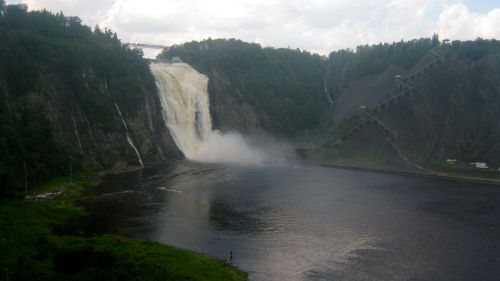 This entry was posted in Canada. Bookmark the permalink.

3 responses to “A Visit to Montmorency Falls”