In Which I Meet Apollo 15 Astronaut Al Worden 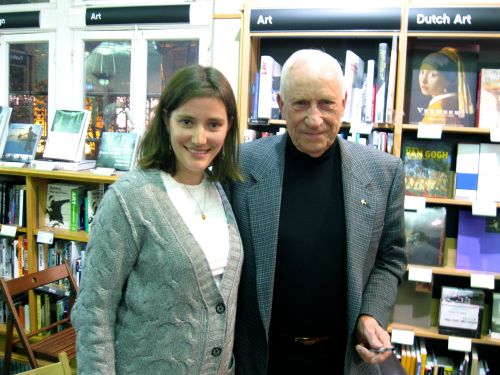 Only 24 people have ever flown to the moon, and I met one of them in Amsterdam last week!

Astronaut in question was Apollo 15 command module pilot (read: didn’t land on the moon) Al Worden, who was in Amsterdam to do a book signing. And I’m so glad I did because he was a neat guy who loved to talk about space and his experiences… quite the gentleman in fact.  Just a handful of folks showed up for the event, and I was a few minutes late but the Q&A session was in full swing already talking about space policy and the like.  Then we got into a bit of talk about what Apollo 15 was like, interspersed with lots of fun “details you’ve never heard about” type material.  A random sampling:

– Apollo 15 was the first mission to head to higher latitudes on the moon 30+ degrees from the equator, and they didn’t have the gravity quite figured out for higher latitudes yet.  So Worden woke up one day while they were down on the surface to see the mountain near the landing site looked above him… first thought was “we’re dead” followed by talk to Mission Control and the two on the surface coming back a little earlier than expected, turns out the command module was a mere 4 miles above the mountain.  Yikes!

– Apparently the three on Apollo 15 were all Air Force guys but they were backup for Apollo 12 that was all Navy, so when the two others landed to go “play army” (a term that cracked me up) Al made sure Mission Control played them the Air Force theme at one point.

– At one point the other two astronauts on the moon at the time were told to go take a sleeping pill and sleep for 8 hours, they refused because work needed to be done. Later they learned the reason was James Irwin, one of the fellows, was having a seriously irregular heartbeat and wasn’t too far from having a heart attack on the moon… he later had his first major heart attack six months after the flight, had several bad ones (including quadruple bypass surgery) until finally dying of one in the 90s. As he never showed any symptoms pre-flight it’s never been figured out whether he had a preexisting condition or whether 2 weeks in outer space did it.

– It turns out if you go into space your heart rate after orbit can get as low as 12 beats a minute but then increase to a normal pace, and when Worden got back to Earth his heart rate went up to 120 a few hours after. I asked what he felt the physical effects were after returning and he said he didn’t feel his heart beating hard or anything like that, but rather automatic motions like walking and picking something up were conscious decisions for some time. You just literally don’t reach far enough to grab something after being in space because you’re not compensating for gravity.

– After returning to Earth (Worden piloted the whole way, one parachute burned up just before splashdown) they got into a bit of trouble for something prior astronauts had done but no one had cared about and wasn’t illegal- namely taking some postal covers and selling some to finance their kids’ future educations (astronauts at the time made ~$52k/year in today’s money). But they decided to make an example of said astronauts so he got fired from the astronaut corps and sent out to NASA Ames in California to finish his Air Force time, something he said was good in hindsight as it’s not like he was going to be an astronaut again cause all missions were booked for the next ten years.

Anyway if you’re still reading this tome, after all that I got in line to get my book signed and when it was my turn Al Worden gave me a look and a no-nonsense “so what do you do?” I swear someday I’ll not be surprised by this all the time, but turns out cute young American ladies don’t usually show up in such geeky crowds making intelligent references to physics and engineering during discussions.  Who’d’ve thunk?

When I explained who I was he got quite happy and excited, then proceeded to tell me how he later heard that while he was on the far side of the moon and officially the most isolated person of all time (almost 3000km away from any other person) they estimated he saw a million stars in the sky. Normally on Earth you see only a few thousand stars!  I genuinely don’t know if I’d ever been so jealous of someone I’d met before, and he rounded it off with philosophical quote- “What is infinity? We don’t know, and I’ve seen more of infinity with my own eyes than anyone else has. You think about it and realize we don’t know a thing- just imagine if you took one of our telescopes and put it out there for starters.”

As I said, a great guy!  And to conclude, this was obviously a super awesome event that I seriously enjoyed and all that. And I highly recommend you go out of your way to meet an Apollo astronaut over the next few years- they were all born in the 1930s if not earlier, and the facts of life dictate that there are only a few years more where guys like Al Worden can tell us firsthand what it’s like to explore another world.

This entry was posted in Amsterdam, Science!. Bookmark the permalink.