A Daytrip to Luxembourg

There are two kinds of people in this world: those who think that taking a two hour train ride on a Saturday from Paris to Luxembourg just to see what it’s like is a worthy adventure, and those who will sort of stare at you funny when you mention this and have no idea why you would do this.  Fortunately the latter is too lazy to get out of the house in the first place, so my travel buddy Nick and I got to discover that of all the new countries to check out Luxembourg is one of the prettier ones- 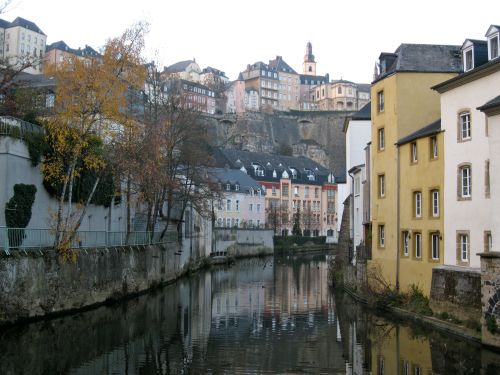 Basically the Grand Duchy of Luxembourg is where it is because the Old City is in one of the best defensive positions in Europe- “the Gibraltar of the North” is I believe the phrase used at the history museum we stepped into (which is how I now know more about Luxembourg than I ever thought I’d know).  The old fort was built on top of a dramatic curve of the valley so it seems like every major country in Western Europe strategically held the fort at some time or another, meaning that while Luxembourg primarily felt French there were definite touches of German and even Dutch influence around.  And somehow despite the tides of history Luxembourg still has a grand duke as their monarch today, the only Grand Dutchy remaining in the world.  Incidentally, I rather like the phrase Grand Dutchy and am rather tempted to write Grand Dutchy a lot of times in this post because I will never get to use Grand Dutchy again because nowhere else qualifies as one, but using Grand Dutchy four times in a sentence will probably help me restrain myself. (Ok, one more: Grand Dutchy!)

Luxembourg City is a rather nice little town today and pretty perfect for a daytrip if you ask me- we got a nice walking tour map from the tourist office which we combined with some geocaches in the area, and wandered all about.  As in seriously, while I don’t say this often by the end of the day I’m confident that both of us felt like we’d “done” Luxembourg, which isn’t to say it wasn’t nice so much as that it was very small!

So anyway, during the typical wanderings about it was all quite pretty- it’s one of those never bombed or modernized lovely old cities of Europe- complete with the requisite castle ruins, fort, church, etc.  I will say that they definitely had some lovely details and examples of public art around here-

Public art is actually one of those things that has impressed me since I moved to Europe by the way- I won’t say I didn’t notice it on previous trips, but it certainly adds a lot more to a place when there’s a carving on the side of a building exposed to the elements which would be stowed away inside a museum back at home.  Life is just that much nicer when you just have to go out into the street to see beautiful things! 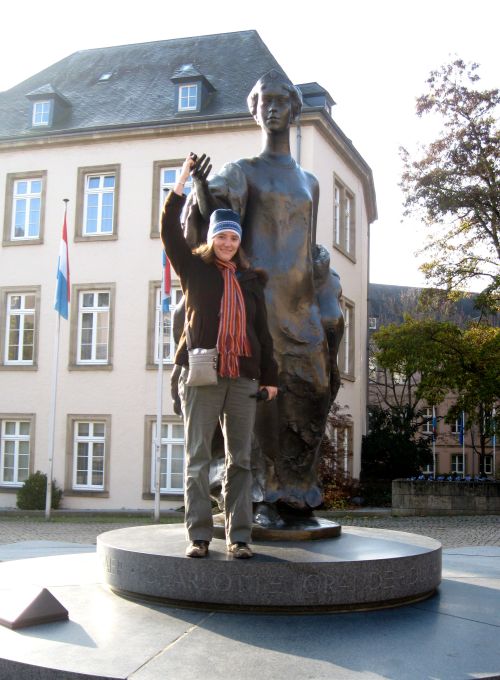 By the end of the day when we were waiting for our train back to Paris the both of us were worn out from all the walking, but filled with the quiet satisfaction one gets from having explored a previously unknown corner of the world (or was that just the wine for the ride back?).  My thanks to Nick for suggesting this daytrip in the first place, as I don’t know if or when I would have thought to head to Luxembourg myself!  I guess that’s what travel friends are for.

This entry was posted in Luxembourg. Bookmark the permalink.

One response to “A Daytrip to Luxembourg”