About a year ago, my brother Patrick and I entered a pact that if we were both in Europe this year we were going to Dublin for it to celebrate St. Patrick’s Day.  This year finds me in Amsterdam and Patrick studying in Budapest so the long weekend with the Irish seemed inevitable, and we’re both very happy we did! 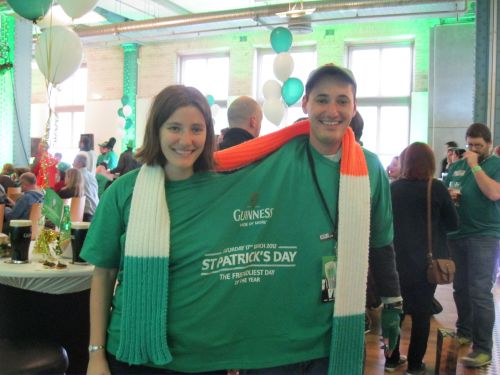 So first of all, one common thing many an American has said to me since hearing that I went to Dublin for the holiday is “oh, I heard it’s not that big over there as it is in the States.”  I’m happy to confirm that this just isn’t true- the whole city took on more a festival air than in the USA, though there were certainly plenty of drunks if that’s your primary motivation.  Sure there are more Irish people in America now than Ireland by a large margin, but we definitely found lots to do and had fun!

The fun began with the Dublin St. Patrick’s Day parade, billed on their own website as “the largest St. Patrick’s Day parade outside New York City!”  Ok, with that one isn’t really expecting a Disneyland bonanza, but I still thought it was a cool parade and the fact that there was a “science” theme for some reason didn’t hurt my opinions either- 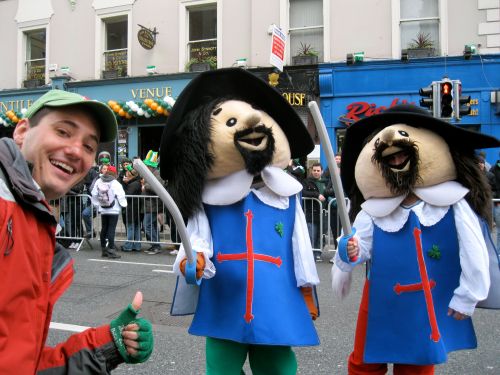 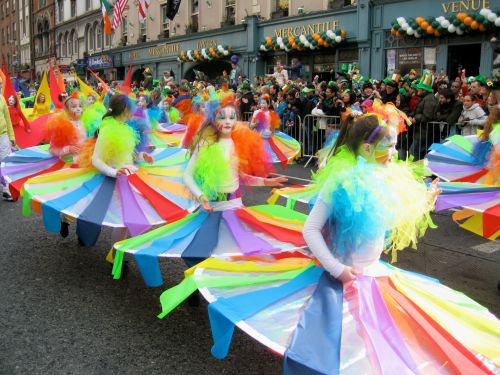 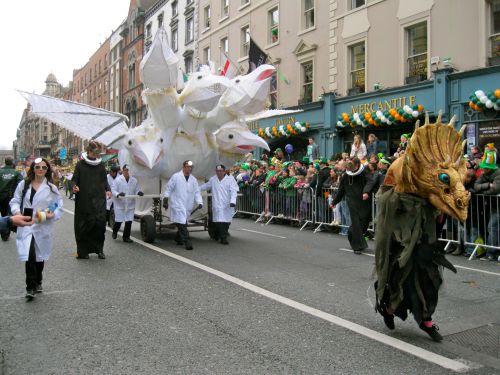 After that we headed straight to the Guinness Storehouse because theIrish Times had kindly mentioned that all people named Patrick were being granted free admission, and who could turn down something like that?  Patrick was given a “VIP” badge, short for “Very Important Patrick” of course, and by mid-afternoon the party was in full swing with ample amounts of free food, drinks, and music everywhere- 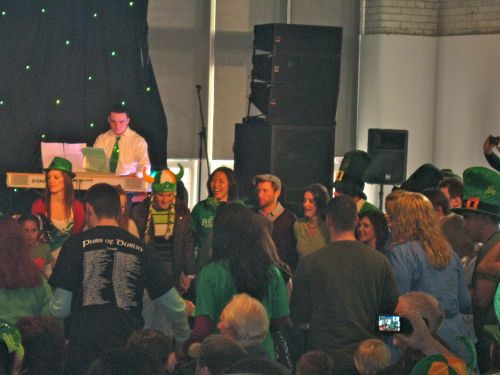 At some point the Irish step dancers let the crowds onto the dance floor to learn a few Irish dances as well, so I joined in.  Because if you have already traveled all the way to Dublin to join in on the festivities and have a thing for Irish music I’m not entirely certain why you wouldn’t!

Eventually we ended up leaving the Storehouse to find a good pub to watch an important rugby England-Ireland match in that was going on (though alas Ireland lost), and in general wandering around to a few of the different pubs that I enjoyed on previous trips to Dublin.  A picture from the corner window of The Stag’s Head, a great spot near Trinity College- alas a bit blurry from the lights in the window but gives you an idea- 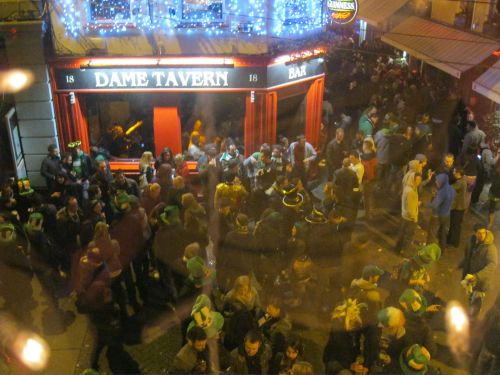 Let the above picture dissuade anyone who claims Dublin is a boring place to be on St. Patrick’s Day- we were deliberately staying away from the tourist masses in the Temple Bar area and the city was still packed!  Though to be honest, I don’t believe that anyone who thinks the Irish wouldn’t throw a good party on their national day in the first place have never really encountered the Irish.

Oh, and because it’s as good a place to insert it as any, an Irish friend’s opinion on the matter of their reputation- “I’m so bloody tired of Irish stereotypes! As soon as I finish this drink, I’m punching someone.”

So St. Patrick’s Day in Ireland was a most successful adventure to be sure, though I’m mildly embarrassed to admit we were in bed by midnight!  That’s what happens when you start 12 hours beforehand and go without a break though I guess…

This entry was posted in Ireland. Bookmark the permalink.