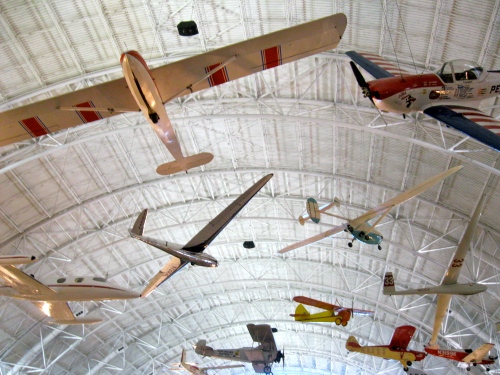 When I was in the USA last month I spent a week in the Washington DC/ Virginia area, and when I do so I can’t resist a visit to the National Air and Space Museum on the National Mall to visit “old friends”- the Apollo 11 capsule, The Spirit of St. Louis, the moon rock you can touch… you get the idea.  The National Air and Space Museum is the most visited museum after the Louvre in Paris, and the fact that surprisingly little of the primary exhibits has changed since it opened in the 1970s is both endearing and depressing when you realize there’s been no reason to update the Apollo-era exhibits because we last went to the moon in the 1970s.  But that’s a space geek rant for later…

But anyway, less well known but no less awesome is the Steven F. Udvar-Hazy Center, the annex of the National Air and Space Museum located about 40 minutes drive outside DC in an old aircraft hangar by Dulles International Airport.  Basically the issue with running a museum dealing with air and spacecraft is they’re not exactly as small as a portrait or mineral so the primary location in the center of DC ran out of space long ago to hold everything since, well the 1970s, so the solution was to put all these lovely craft in a building large enough to hold them a few years ago.

And wow, what a building it is!  Over 300 airplanes and space artifacts all over the place with several docents offering guided tours so you can learn a few precious details, from what it was like to fly on the Concorde, to how a rare piece of the Hindenburg ended up there, to how a curious World War II plane with Japanese markings was actually launched from a submarine and is the only sort of its kind in the world…

To briefly touch on some of the specific craft here, likely the most controversial one is the Enola Gay, the specially modified B-29 bomber which dropped the atomic bomb on Hiroshima, Japan.  Since its restoration in the 1990s several groups have protested the aircraft being on display and the way the issues surrounding it are presented- one director of the museum was forced to resign, at another point anti-nuclear activists threw ash and human blood on it.

If you ask me though the only reason the Enola Gay is controversial is because it was the first- just like no one knows who ran the second four minute mile, no one knows that the plane that dropped the atomic bomb on Nagasaki, Bockscar, has been quietly on display in Dayton, Ohio for decades.  So it’s a bit of a silly controversy, really, but but sadly no one ever consults me on these things. 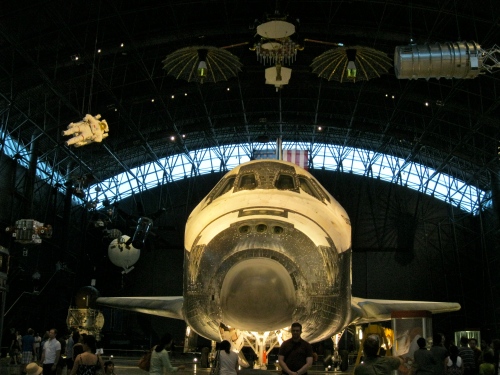 When it comes to the most popular craft in the museum, though, the hands-down winner is Discovery, the newly-acquired Space Shuttle that was just put out to pasture here a few months ago.  It’s quite a lovely machine, and quite something to walk around something so big and tell yourself that not only did this thing to to space it also did things like take Hubble up with it.

It’s nonetheless a little depressing though for the same reason the Apollo mission stuff in the original Air and Space Museum is, because there are no more American craft flying to space.  Am I the only one who feels this way?  If you’re not like me let me explain it in a touch more detail- when 50 years ago this week John F. Kennedy gave his landmark speech that we should go to the moon by the end of the decade not because it’s easy, but because it is hard, I sincerely doubt anyone who heard it would have believed half a century later we’d be hitching rides with the Russians to a paltry station in low Earth orbit.

On that note, lovely museum that’s great for a geek-out, but I really wish I wasn’t seeing the most advanced spacecraft humankind ever built included there as a part of history.  Here’s to hoping the next time I visit my “old friends” there will be some new ones to visit too, ones that aren’t retired to a museum!

This entry was posted in Science!, Virginia, Washington D.C.. Bookmark the permalink.