Lisbon and the Greatest Disaster You’ve Never Heard Of

The first thing I want to tell you all is that Lisbon is very nice.  Really nice, honestly, especially when it’s the beginning of February and you’re looking for a weekend break to find some sun and get a brief taste of a country you haven’t been to before.  The people are lovely, the prices are right, the seafood is amazing, and the little old trams are adorable- how could it not be?

Well the reason I’m getting into this is the second thing I have to tell you, and that’s for all its nice aspects it soon became apparent to me that Lisbon had something, well, missing compared to what you usually expect from the capital of the wealthiest country in Europe at a time.  What I mean by this is if you think about cities they tend to be defined by the time period in which they were most successful- Amsterdam still looks as it did 400 years ago during the Dutch Golden Age, New York City is defined by the skyscrapers of the past 100 years, London is crammed with Victorian architecture right down to Big Ben and Parliament… you get the idea.  So what about Lisbon?  The Portuguese were the world’s first naval explorers, pioneering the route to Asia and making the first European colonies abroad that made them incredibly wealthy, but their capital city has no major traces of this period- no museums stuffed with treasures, no stunning architecture.  What happened?

The answer, it turns out, lies with the greatest natural disaster you’ve never heard of: the 1755 Lisbon earthquake.  On November 1 of that year a giant 8.5-9.0 earthquake off the coast of the Iberian peninsula, and then a tsunami swept through and destroyed everything and everyone in its path.  An estimated 85% of the city was utterly destroyed including much of its architectural marvels from its Golden Age 200 years prior, such as the Royal Palace crammed with Caravaggios and Reubens and all sorts of artistic masterpieces, as well as the library holding famous nautical records and relics of early Portuguese explorers like Vasco de Gama.  Up to 100,000 people lost their lives too- numbers all the greater when you remember there were a lot fewer people back then- and the tragedy shocked Europe to the point where it’s said the cultural influence on Europe at the time was akin to the Holocaust today. (Voltaire uses it as an example in Candide to argue we don’t live in a world supervised by a benevolent deity, and Rousseau used the problem of so many people together as disaster struck as evidence of a more rural lifestyle, among others.)

So now imagine a similar tragedy hit a major world today- let’s say a natural disaster befell Manhattan, so all its treasures and grandeur were obliterated in an instant.  We could never rebuild that- we would rebuild something very nice, for sure, but New York City would never be the same.

And this is exactly what happened to Lisbon in November 1755.  They did rebuild, of course, with features like wide boulevards and pretty 1700s architecture, but except for one or two places very little dates from before this period, so it doesn’t quite pack the punch it would have had all of it survived.  A good example of this is how one of the largest square in all of Europe is in Lisbon on the shore front- a very nice and impressive square, sure, until you realize this was where the Portuguese Royal Palace once stood that was considered one of the most glorious buildings in the world at the time, complete with a cathedral and opera house in it.  Records indicate they could have rebuilt it, but the Portuguese king at the time (who happened to be out of town that day and survived) was so claustrophobic after the earthquake that he and his court lived in a series of elaborate tents on the hillside until his death.  I don’t blame the guy and his subsequent city planners, but it is slightly disappointing.

Once again, it’s not Lisbon’s fault things are like this and I’m really not trying to knock the city or anything like that- I really did enjoy my weekend here.  But history is often hidden not just in the details of what is present but what isn’t present and learning about all this during my visit just floored me- the story of how the seat of a grand empire disappeared under the waves one morning, and how there are some things you really can’t recover from.  And, of course, how in 200 years tourists in cities like Berlin and Warsaw and Rotterdam will likely find themselves thinking “this is pretty nice, but something’s missing here…” 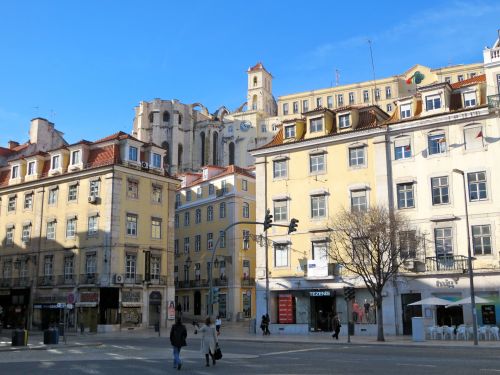 That ruined church on a hill here is an old convent destroyed in 1755, and has stayed there ever since as one of Lisbon’s few old buildings in memory of the earthquake.  But I wonder how many people look up and realize the story those exposed old beams tell?

This entry was posted in Portugal. Bookmark the permalink.