Artie is my super curious little aardvark friend who comes along on adventures where astronomers go, like our brewery weekend in Belgium.  Part 1 of his adventure can be found here.

The last day of the Belgian weekend I was super-duper excited in the morning cause we were going to visit a famous Trappist brewery called Westvleteren.  Westvleteren monks only sell enough beer to cover the costs of the monastery so even though some people call it “the best beer in the world” it is super-duper hard to get your paws on some.  But it turns out not to be so hard if you go to the monastery and buy some at the tasting room!

Here is the beer we bought for everyone at the table, complete with the bottle caps for the beers we purchased.  They make three different kinds of beer here and lots of people who drink a Westvleteren will keep the bottle caps to prove they’ve drunk it!

I really wanted to keep a bottle cap so I set to work on one of the glasses!  I don’t know if it’s the best beer in the world and if it would be called that if it weren’t so hard to get, but it is very nice!

Me taking a post-drinks siesta: the beers here are 8-12% in alcohol, so even a few sips from one is not good for an aardvark’s system!

After Westvleteren, we headed north back towards the Netherlands.  We did a short pit stop though at a pub just next to the Kasteel brewery, which used to do tours but no longer does due to some inheritance dispute that sounded very silly to me.  But it worked out alright if you ask me, as I made friends with this very nice Belgian couple who let me explore the taps! 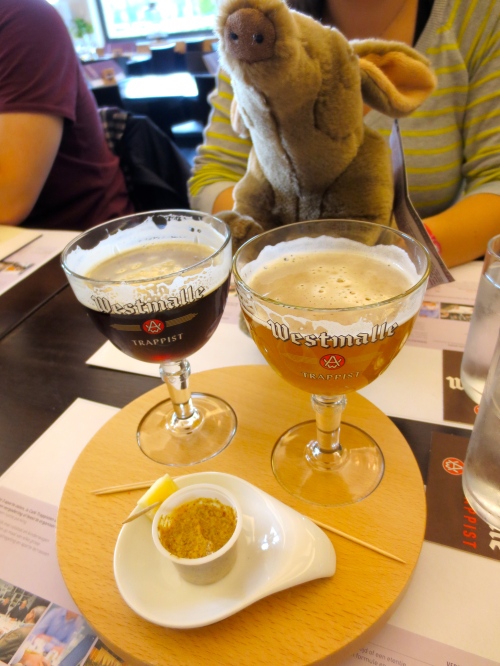 Finally in the evening it was time for one last stop for dinner at Westmalle trappist brewery right next to the border with the Netherlands.  Westmalle makes two kinds of beer, one light and one dark, so it’s easy to distinguish the kinds they make!

After that, it was time to go home to Amsterdam and spend a little time recovering from my adventure on Yvette’s bookshelf. (I spend a lot of time hanging out there and reading when I’m not exploring.) I really enjoyed my weekend in Belgium and think my favorite brewery was Westvleteren- it might not be the world’s best beer, but it’s still very good, and it’s fun to visit famous places!  Though I think I should petition them next time for an aardvark-sized glass of the stuff!

This entry was posted in Artie Aardvark's Adventures, Belgium. Bookmark the permalink.