For those of you who don’t know him, Artie Aardvark is my curious little aardvark friend who is the mascot for our radio astronomy group.  He likes to tag along on astronomy adventures and write about them in a far cuter way than I ever could.  Take it away, Artie! 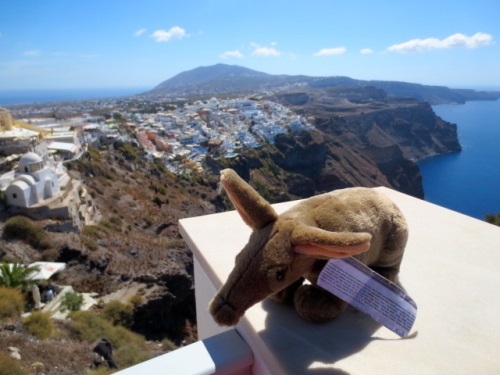 Wow it’s a good life being an astronomy project’s mascot- the astronomers had a conference here in Santorini and they brought be along!  This is the view from the conference center.  I think it might be the prettiest place in the world to have a conference. END_OF_DOCUMENT_TOKEN_TO_BE_REPLACED

My Boring and Tragic Life Continues

The view from the hostel-more-like-a-hotel terrace on the lovely island of Ios, Greece where I am spending the weekend.  And from which I am now writing this, but the blue has been replaced by black and twinkling lights from stars above and houses below.

I am here because I just spent a week at an astronomy conference in Santorini- an amazing island I briefly visited before, so a week there was excellent- and while it was an amazing week during which I learned a lot and met many wonderful people it was also a fairly intense.  Let’s just say I have earned a weekend by the pool and a lack of discussion of spectral variation and confusion limits over the sunset cocktail.

The good news is as this was an astronomy conference Artie Aardvark tagged along to explore, so while typing unfortunately takes him longer (what with lacking digits) he will have a dispatch from Santorini soon!  Stay tuned…

It is a rather incredible thing to stop and think how I moved to Amsterdam two years ago.  In many ways two years is a long time: long enough to graduate from a beginning PhD student in your department to a senior one, to learn the rhythm of the seasons at a European latitude where sunset times range from 4pm to 11pm, to master the chaotic intimacy of an Amsterdam bicycle commute.  Two years of living somewhere is plenty of time to move twice, try a long distance relationship, learn enough Dutch to realize you know what people are discussing at the next table, learn how to do improv comedy, learn all the shortcuts and secret haunts, know the one place in town that sells chocolate syrup, and a myriad of other things you deal with in daily life but only learn with experience.

In the past two years I have visited about 20 countries.  How, dear reader, did that happen? (Ok, there is an answer: mainly weekends and an expert manipulation of short distances and cheap fares from a major center of European transport. But geez, that’s quite a few.)

But anyway.  Since most of you likely don’t know, the reason two years is a particularly noteworthy thing to mention is it means I am halfway through my time in Amsterdam because my contract is for four years total, and they are fairly strict about making you graduate on time in the Netherlands (you might extend a few months, but that’s it).  If I can tell you anything about the coming two years compared to the last two it’s it will be dominated less by exploring life abroad and more with “OMG I need to write a thesis,” as my friends who have done it seem to all disappear for at least six months when preparing to submit.  But there’s a reason getting a doctorate in astrophysics is supposed to be hard, right? As a final note, in honor of this halfway through my time in Amsterdam occasion, I thought I’d take a moment to answer the three most common questions I get from people who want to know how things are going.  In no particular order: END_OF_DOCUMENT_TOKEN_TO_BE_REPLACED