I suppose it’s not terribly surprising that a geek who loves to travel also has a fondness for maps. I’ve had them on my walls for years and years, first to mark all the shortwave radio stations I’d heard and contacted and then to mark where I’ve been once I started visiting them.  I think being a map person is one of those things you either are or you aren’t- upon renting a car you either study the random free map they give you in great interest at some point during the journey, or only bother to grab it when vainly trying to figure out where you got lost.

Anyway, last June I happened to be in London the same weekend as the London Map Fair held for a weekend at the Royal Geographical Society.  It is the largest antique map fair in Europe (I knew- who thought there’d be competition for a thing like that?) and while I usually hate shopping the idea of pawing over various maps throughout history sounded like a really fun thing to do.  Throw in the fact that it was held in the building of the same society where Charles Darwin and David Livingstone and Ernest Shackleton would discuss their explorations over cigars and brandy and I was sold!

It turns out the Royal Geographical Society building itself wasn’t that interesting- it was rebuilt as one of those boring modern places, so Shackleton certainly never visited it- but the map festival itself was wonderful with prints and sketches and globes of all corners of the world stretching back hundreds of years.  You certainly wouldn’t be allowed to handle centuries-old art and take a few home for a reasonable price to boot, but apparently this does not apply for maps.

Now if I am anything I am a geek first and a romantic second, so after looking around I knew what sort I wanted- a map where eventually the borders end, and a cartographer filled in the blank space with an intriguing “parts unknown.”  I know we lucky to live in an era where seeing the entire world is possible in a way unimaginable to previous generations, but I still feel a slight twinge at being a few centuries too late to be a proper explorer.

Anyway, the reason you’re hearing all this now is while I visited the fair many moons ago is I finally got around to framing what I bought there!  To start with the pièce de résistance, this is a map of North America from 1759-

Not sure of its origin (except it’s English) and I only know the date from the dealer, but it’s very cool to have a 250 year old map on your wall I think…

I’ve been looking at this a little while to try and figure out where exactly “parts unknown” begins. I’m guessing the crook where it begins in the Pacific is around where Seattle is today, the Missouri River connects to the Mississippi (not sure what that random river is between the Missouri and the Pacific), “Lake Nempigon” connected to “Upper Lake” are now Lakes Nipigon and Superior, respectively. It’s pretty obvious no one had explored the Arctic much at all yet.

Of course, a big factor in all this is if you go back to that time the English were actually not huge explorers of North America- the Spanish and French were a fair bit ahead of them, so it’s likely their maps at the time would hold more detail.  In an era of instantaneous information sharing, the fact that things like the Rocky Mountains or British Columbia would be not known universally for years is a rather interesting one to consider.

What I find myself fascinated by are how there’s a decent amount of places on the map that were clearly important at the time (else why include them?) but I can’t find much info on now.  One example of that is “Fort Nelson” above Lake Nipigon- it appears to be Port Nelson, Manitoba.  Established in 1684 by the Hudson Bay Company as a fur and trading outpost, it was fiercely fought over by the French and English for decades and changed hands several times, but has now been abandoned for decades.  In all those battles I wonder if anyone would have believed that?

I also particularly like the name Eskimaux for what is now Quebec.  I realize of course that no Inuit tribes were in that area ever, but it would have made for a more interesting name than the current one in my opinion.

Anyway, as wonderful a discovery and purchase that map was, another one caught my eye that I couldn’t resist nabbing as well- an 1843 map of the Solar System! 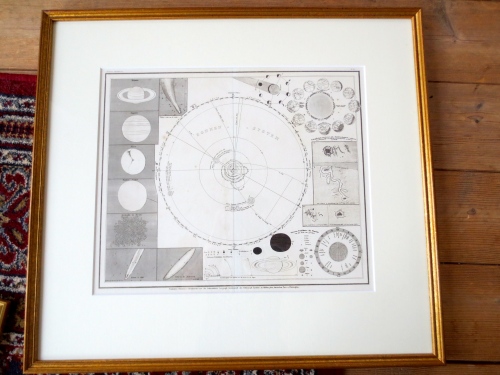 At first I was not certain how old this map was, except the latest date on it is the illustration of the Great Comet of 1819 and it doesn’t have Neptune on it (which was discovered in 1846). Incredibly enough a reverse Google Image search brought up a match for it in a university library- it’s from “Meyer’s Großer Hand-Atlas” which was printed in Germany in installments starting in 1843 through 1860. (They did the astronomy ones first, hence no Neptune.) Curiously because it was printed in installments you’d have to do the binding yourself of the full atlas. 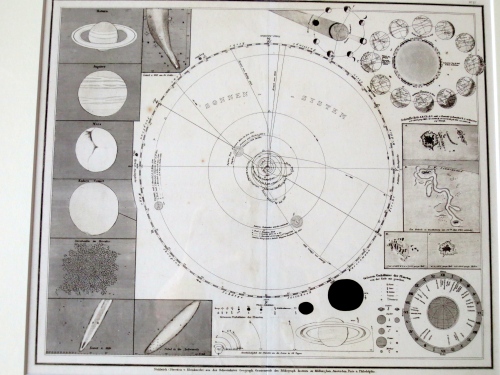 Note the “nebel in der Andromeda.”  Also interesting (well, to me) is Uranus has four moons- when William Herschel discovered the planet in 1787 he also eventually claimed to discover six moons in subsequent decades.  No other astronomer saw any of the moons beyond the first two, but despite this minor detail everyone just assumed Uranus had six moons until 1851 (when another astronomer discovered Uranus’s 3rd and 4th moons which had orbits completely different than what Herschel described).

I realize that sounds a bit arcane, as who cares if Uranus has six moons or 27.  Nevertheless, discovering moons was a huge thing back then, and the fact that no one would seriously question Herschel’s observations for the better part of a century really tells you astronomy was a different field then compared to today.

And finally, not purchased at the map fair but still noteworthy, as a bonus here is a map of Pittsburgh from 1898 that is from an antique shop in England.  For those who don’t know I grew up in Pittsburgh (albeit in a community that does not yet exist on this map!) so it’s a good one to have for me-

A little internet searching found this is from “Cram’s 1898 Universal Atlas- Geographical, Astronomical, and Historical.”

A close-up of what is now downtown Pittsburgh…

… and a close-up of Allegheny City, which became part of Pittsburgh in 1907.

Finally for those who know the area, this is a close-up of what is now Squirrel Hill/ East Liberty.  I used to go to school right next to what are listed here as the “stockyards,” which for those who know the area is now the old Nabisco plant/ now Bakery Square. For some reason I was fascinated to learn there was also a train station there, marked as “Torrens Sta,” as I’ve never heard of it but commuted past it every day on my way to school (the site is now a gas station).

All told, I think it’s a nice little collection and although it’s not what I usually write about here the allure of an old map is too large to resist.  It’s one thing to know places change over time and another to actually see it- to realize people used to care about Fort Nelson which you will never visit because it no longer exists, to have a newfound appreciation for space missions so you don’t have to be satisfied with a Mars with grainy features when you can see pictures from a rover of the surface.  It’s the same world in many ways, sure, but so very different in many others.

This entry was posted in history, United Kingdom. Bookmark the permalink.

4 responses to “Maps from Parts Unknown”