Not to be confused with its American counterpart with only one “a” and where you are much more likely to get mugged, the Dutch Haarlem is about 15 minutes by train and an hour by bicycle from Amsterdam.  I know this because I happened to do both in one direction each this past weekend- not a bad day out!

Posted in 0. The Netherlands, snapshots, tourism

The title of this post comes from the name of a lovely old Dutch song, “On the Amsterdam Canals.”  The sort of old song you will hear sung by people in the wee hours of the night, but anyway, the first bit of the chorus roughly goes:

Indeed.  I’ve been here nearly a year, and am fairly convinced that this is not just the prettiest city in the Netherlands but maybe even the entire world!

But anyway, one of my most favorite things about Amsterdam is the view from my apartment, namely sitting out on the little balcony and watching the world go by.  In Amsterdam, this translates into a lot of boats- big tourist boats, little old wooden ones, and pretty much everything in between you can imagine. (This boating is not at all like the sort one does in the USA as you’re not allowed to have a wake- instead it’s more of a cruising while enjoying drinks and snacks with friends sort of boating.) Some of the boat traffic is particularly amusing for various reasons, necessitating a picture, so here is the best of the canal traffic I’ve seen over the past year for interested parties-

The legendary clog boat!  Which I saw once just after I moved but didn’t think to take a picture, was kicking myself for several months that I hadn’t taken said picture, but finally spotted at the end of May.  Whew! 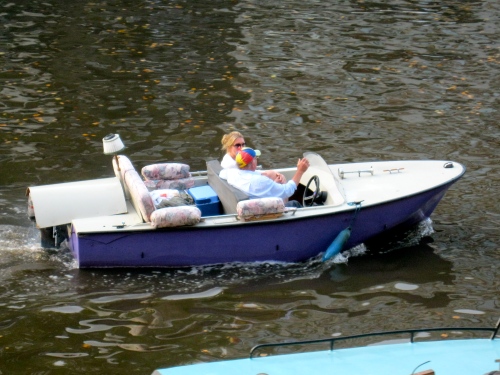 The living room boat- this guy actually keeps his boat one canal over, I’ve seen him several times.

This picture was taken in the middle of winter and I’m not sure what it’s about- I suspect the group needed a picture for something?

Lots of strange boats on Queen’s Day filled with revelers…

And part of a regatta of boats- a very long one actually, they caused several traffic jams- which was about who knows what, but things like that happen quite often in Amsterdam.

All those people in Amsterdam
All those lights late at night on the square
No one can wish for more
Than an Amsterdammer!

I’m cheating and not using the current view here because trust me, the current view of the area is quite gray and not particularly inspiring.  But I was out here in this remote corner of the eastern Netherlands because it’s where ASTRON is, so I felt the area itself deserved some mention.

The curious detail about ASTRON is it’s in the middle of Dwingelderveld National Park, though I feel obliged to mention that by Dutch standards a national park just means trees and is strikingly similar to the Pittsburgh suburb where I grew up (actually even less so, as there were no fences there!).  This detail manifests himself in curious ways- for example I have no issue sleeping through birds chirping in the wee hours, but hearing that will instinctively make me hop out of bed on the left side as I used to growing up and that’s rather awkward when there’s a wall there instead. (I swear I did this more than once even though I knew I wasn’t in Pittsburgh- and in fact never will hop out of bed at that house again, as my parents sold it about a month ago.)

But anyway, the next time I come out here will be just after Easter, and I’m told the Dutch countryside is quite a sight to see that time of year.  Stay tuned…

Posted in 0. The Netherlands, ASTRON, snapshots

I’m not saying the weather in Holland is strange, I’m just saying it was warm and sunny enough today to head to the beach on October 1st!  Though to be fair the Dutch find the current weather rather strange too…

The closest beach to Amsterdam is at Zandvoort aan Zee, which is a half hour train ride from Amsterdam. (A bit crowded, sure, but you are a half hour from Amsterdam!) Zandvoort isn’t exactly a pretty beach town- it’s made out of concrete like it’s going out of style sort of thing- but it’s a good beach and has plenty of Dutch children frolicking in it who clearly don’t realize the North Sea is friggin’ cold!

Posted in 0. The Netherlands, snapshots

Snapped on my first trip outside Amsterdam in the Netherlands, this is Dwingeloo Radio Observatory.  Constructed in the 1950s, it has a diameter of 25 meters which at the time made it the largest radio telescope in the world.  These days it’s no longer used for research and instead just by amateur radio enthusiasts, but it’s still located right by ASTRON, the headquarters for astronomy research in the Netherlands near the village of Dwingeloo.

Honestly I will be out at ASTRON so many times over the next few years I don’t feel obliged to give a full tour yet (already scheduled to go out twice next month, once for a full week!), but I thought it was a rather nice bit of scientific history to find hiding in a remote corner of Holland.

Just checking in with this rather touristy but still fun photo in Amsterdam.  Made it here a few nights ago and am glad to confirm I have already taken care of what’s most pressing on everyone’s mind- yes, I got a Museumkaart which allows free admission to virtually every museum in the Netherlands!  And have already almost made it all back in just a weekend of museum visiting…

For the minority with more mundane concerns, the Great Amsterdam Apartment Search continues but will hopefully be resolved soon.  More later when things are more settled!